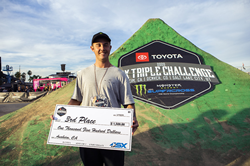 Now in its fourth year, the Toyota BMX Triple Challenge is a three-stop competition series that takes place during select Monster Energy Supercross events. Dedicated to showcasing the progression in freestyle BMX, the series attracts the best riders in the world as well as up-and-comers who are looking to make a name for themselves. Following the season kick-off in Anaheim, the 2020 edition of the Toyota BMX Triple Challenge will include stops in Denver, Colorado, and Salt Lake City, Utah.

This weekend’s Anaheim event consisted of two back-to-back dirt jumps as the perfect backdrop for high-flying aerial tricks. The field of competitors was stacked with A-listers. The same riders who compete for medals at the X Games – and also this year’s debut of BMX as an official discipline at the Tokyo Olympics – put on an air show before the Supercross racing action commended inside the venue.

Monster Energy’s Casey came into the event as a podium favorite after claiming the win at last year’s Toyota BMX Triple Challenge season opener in Anaheim. But this year, ‘challenge’ was the operative word as California’s Jake Leiva and Argentina’s Gabriel Chaves cranked up the heat in Saturday’s eight-rider final session.

Rising to the challenge, Casey reached deep into his technical bag of tricks to send a triple whip 360 aerial over the first jump, followed by a technical Cash Roll over the second set. Casey also sent a massive 360 Superman seatgrab over the first into a tailwhip cashroll on the second jump. When the dust settled, the judges awarded the 26-year-old from Placentia, California, a strong third-place finish.

When it came to crowning the winner in Best Trick, Buckworth made it easy for the judges: In front of the high-energy crowd, the BMX trailblazer stomped a front flip Indian air that had the crowd on its feet. As his winning trick, Buckworth served up a no-handed double backflip over the dirt jump and walked away with the well-deserved trophy. Known for showcasing his skills on the Nitro Circus Tour since day one, the 29-year-old from Lake Haven, Australia, already made history as the second BMX rider ever to land a double frontflip, which later earned him an X Games bronze medal in BMX Big Air.

Also stoking the crowd in Anaheim, Monster Energy’s Colton Walker from Richmond, Virginia, pulled a clean bar spin to whip backflip and 360 double whip late bar spin on the second set. Although he had qualified into the final in first place, the 22-year-old expert in dirt riding had to settle for fourth place. He was followed by teammate Kyle Baldock from Australia in fifth place, who bar-to-bar backflipped high above the first jump into a front flip tailwhip on the second.

Rounding out a strong showing for the team, Monster Energy’s Mike Varga landed a technical backflip to bar spin over the first set into a mind-boggling Cash Roll over the second jump. The Canadian BMX innovator walked away with sixth place but will surely be back at the next Toyota BMX Triple Challenge, which takes place in Denver, Colorado, on April 4, 2020. Stay tuned!