Mr. Wonderful does it again! Monster Energy congratulates Phil Davis on winning the main event fight against Lyoto “The Dragon” Machida at Bellator 245 inside Mohegan Sun Arena in Uncasville, Connecticut, on Friday night. 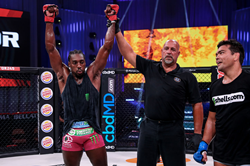 “Machida is such an elusive guy, it’s so hard to get a hand on him. He’s just one of those guys, it's very frustrating,” Phil Davis

Mr. Wonderful does it again! Monster Energy congratulates Phil Davis on winning the main event fight against Lyoto “The Dragon” Machida at Bellator 245 inside Mohegan Sun Arena in Uncasville, Connecticut, on Friday night. In the highly anticipated rematch, the 35-year-old light heavyweight division fighter from Harrisburg, Pennsylvania, took the split decision victory over the Brazilian karate master after three rounds.

Bellator 245 opened a doubleheader event weekend, followed directly by Bellator 246 Archuleta vs. Mix on Saturday night, at Mohegan Sun resort and casino. Aired on Paramount and streamed on DAZN, Bellator 245 – Davis vs. Machida II was contested as a closed-to-the-public event amid extensive COVID-19 safety protocols for staff, officials and fighters.

Anticipation was running high for Friday night’s bout between Davis (22-5 MMA) and Machida (26-10 MMA). The two light heavyweight fighters had last clashed in 2013 at UFC 163 in Rio de Janeiro. In the heated bout, Davis took the win by unanimous decision on the Brazilian’s home turf, instantly followed by controversy over the judges’ scoring.

On Friday night, both fighters were ready to settle the score once and for all seven years later. Davis stepped into the Octagon as a former Bellator light heavyweight champion and on the strength of two consecutive victories. But Davis also came into the fight fully aware of his opponent’s karate skills, especially flying kicks that have taken out certified MMA legends.

Keeping his distance and landing strategic shots, Davis spent round one chipping away at Machida’s defenses with leg kicks and body kicks. Davis especially focused on kicks damaging the Brazilian’s leading left leg, which was visibly bruised by the third round. But on the few occasions when he found an opening, Machida proved his counter-strike lethality by firing back with kicks to the legs and body of Davis.

With both fighters choosing their shots strategically, Davis landed a big right hand to the head causing his opponent to stumble at the end of round two. As the fight neared its finish, it was Davis who landed harder and more often compared to the Brazilian. Precise front kicks to Machida’s midsection proved especially powerful and tipped the closely contested fight in Davis’ favor. When all was said and done, the judges pronounced Davis the winner of the light heavyweight rematch via split decision (29-28, 28-29, 29-28).

“Machida is such an elusive guy, it’s so hard to get a hand on him. He’s just one of those guys, it's very frustrating,” said Davis upon his light heavyweight division win at Bellator 245 in Connecticut. Asked about his strategic leg kick defense against Machida, Davis said Machida “was coming off that great knockout against Randy Couture and I had to prepare for that. To be completely honest, I really learned that technique the first time I had to prepare to fight him.”

Davis, who trains with Alliance MMA, has now won three consecutive fights and five of his last six bouts (22-5 MMA). Davis incurred the only loss in the past three years to Russia’s Vadim Nemkov in 2018 via a very close split decision. But the final word in this rivalry is still pending.

According to MMA media experts, Friday night’s victory puts Davis on the short list of potential challengers for new Bellator 205-pound champion Nemkov. Speaking on Nemkov’s recent light heavyweight title win against Ryan Bader, Davis said that the Russian is “an amazing fighter and I’m so proud of him for beating the champion and all that good stuff.” Then Davis added: “But, you know, live it up my friend. I’m coming!”

Stay tuned as the MMA action continues back-to-back at the Mohegan Sun on Saturday night: Bellator 246 will be headlined by a high-stakes bout between Monster Energy’s Juan “The Spaniard” Archuleta and Patrick “Patchy” Mix for the promotion’s Bantamweight champion title. Thanks to Bellator and Mohegan Sun for showcasing world-class fighting events amidst the adversities of the global coronavirus pandemic.