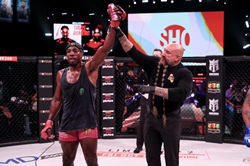 “You got to use the wrestling. God bless wrestling, best sport in the world!” - Phil Davis

Back in the winner’s circle! Monster Energy congratulates Phil Davis on defeating Yoel Romero in the headline fight at Bellator 266 inside SAP Center in San Jose, California, on Saturday night. In the Main Event fight, the 36-year-old Light Heavyweight fighter from Harrisburg, Pennsylvania, went the distance to earn the victory via split decision (30-27, 28-29, 30-26), spoiling Romero’s high-profile debut in the Bellator promotion.

Bellator 266 - Davis vs. Romero was contested in front of a high-energy crowd at the SAP Center in San Jose, California. The Main Card was broadcast on Showtime and Prelims presented by Monster Energy streamed live on YouTube.

The headline fight marked the anticipated Bellator MMA debut of Cuban professional mixed martial artist Romero (13-6 MMA). The 44-year-old is a former Olympic wrestler and three-time title challenger in the Ultimate Fighting Championship (UFC) with a penchant for victories by knockout or technical knockout via punches.

Monster Energy’s Davis (23-6 MMA) stepped into the Octagon looking for a win after his loss to current division champion Vadim Nemkov in the Bellator Light Heavyweight World Championship quarterfinals in April 2021. To his favor, Davis had never lost a fight at SAP Center in San Jose and remained undefeated in four fights at the venue, looking to extend the record against Romero.

The fight started with a tense first round in which both opponents tried to find openings for strikes and leg kicks. Romero moved in a slow, arhythmic fashion but always ready to explode into his signature high-powered strikes and combos, while Davis kept clear and landed calculated punches.

In Round 2, Davis had to absorb a few heavy shots from Romero but succeeded in changing the dynamic halfway through the round: With Romero swinging wildly, Davis upped the tempo and landed a heavy punch to the head that visibly stunned his opponent. Using the momentum, he secured the first (massive) takedown of the bout right before the end of the round.

In the third and final round, Davis put the ‘mixed’ in mixed martial arts and doubled down on his wrestling. Repeatedly taking the fight to the ground, he dismantled the Cuban Olympic silver medalist with precise takedowns – a total of five throughout the fight – and followed up with punishing ground-and-pound. When all was said and done, Davis’ ground control and significant strikes earned the victory via split decision (30-27, 28-29, 30-26).

“You got to use the wrestling. God bless wrestling, best sport in the world!” said Davis upon winning the headline fight at Bellator 266. Speaking on his opponent, Davis said: “Man, he’s a monster. I felt that power more times than I wished I had tonight.”

Davis successfully spoiled Romero’s debut in the Bellator franchise, perhaps to the disappointment of some fans at SAP Center who had favored the Cuban. “Not too often do I hear everybody cheering for the other guy. It was good to be the bad guy for a while,” said Davis after the fight.

Saturday night’s victory brings Davis back into the winner’s circle with a Bellator MMA record of 10 wins, 3 losses. Davis, who trains with Alliance MMA, became the Bellator Light Heavyweight World Champion in 2016 and held the title until 2017. Stay tuned for Mr. Wonderful’s next fight!