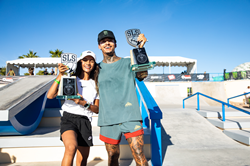 “Every win these days means more and more to me, because I’ve been out here doing it for so long… But I think I’ve got some good years left.” - Nyjah Huston

In front of a stoked crowd at the outdoor skatepark, 13-year-old Leal from Imperatriz, Brazil, took the win in the dramatic Women’s Skateboard Street final that came down to final attempts. In the heated Men’s Skateboard Street final, 26-year-old Monster Energy rider and current SLS World Champion Huston from Laguna Beach, California, clinched the victory in an elite field of riders.

Presented by Monster Energy as a long-time partner and official sponsor since 2010, the Street League Skateboarding (SLS) Championship Tour is the world’s premier street skateboarding competition series. Envisioned by pro skateboarder Rob Dyrdek as an authentic showcase for top street skateboarders, SLS is the official world championship in the sport and serves as a sanctioned qualifier into the Olympic Games.

The freshly updated outdoor skatepark at Tinnell Memorial Sports Park provided the perfect canvas for a weekend of world-class skateboarding. Spanning over 40,000 feet of skateable terrain on the banks of Lake Havasu, the course featured quarter pipes replete with a tombstone extension, a centerpiece featuring kickers and bump to Hubba ledges, plus the stage section with numerous stair sets, rails and Hubba ledges for going big. After the contest, the California Skateparks-designed course remains a permanent fixture for local skateboarders.

Amid perfect weather and Arizona sunshine, the free-to-the-public event drew a high-energy crowd for Stop Two of the SLS Championship Tour. Here’s how the action unfolded for team Monster Energy in Lake Havasu City this weekend:

Kicking off the action on Saturday, the competitive Women’s Skateboard Street final featured eight of the world’s top female street skaters. The field included several Olympic competitors and gold medalist Momiji Nishiya. Riders in the final hailed from Brazil, Japan, as well as the Netherlands and United States.

Hailing from Imperatriz, Brazil, Monster Energy’s Leal entered SLS Lake Havasu as the rider to beat. Previously, the 13-year-old phenom took first place at Stop One of the SLS Championship Tour in Salt Lake City in August after claiming silver at the Tokyo Olympics.

Leal soared through Friday’s Prelims to qualify for the final in first place on the strength of a high-scoring Line at 4.1 points and Single Trick standouts such as gap to crooked grind down the stair Hubba and gap to backside lipslide on the A-frame rail.

When the action moved into the final, Leal was facing heat from Olympic bronze medalist Funa Nakayama taking over first place on the leaderboard. In the Line section, Leal fired back with a gap to backside lipslide and gap to frontside lipslide the A-frame, feeble grind the Euro Gap rail, frontside bluntslide down the rail, kickflip and late backside 180 up the Euro Gap and a perfect backside 5-0 grind down the tall Hubba for 4.7 points.

After the first five attempts – one Line and four Single Tricks – the bottom four ranked skateboarders were eliminated. Next, the top four riders received two more Best Trick attempts, winners decided on the best three scores of the final.

On her fifth attempt, Leal closely missed a kickflip backside 50-50 down the big Hubba. This left the door open for Japan's Nishiya to leapfrog into first place via a big flip frontside boardslide down the rail. Talk about drama down to the last second! With everything riding on the final attempt of the entire contest, Leal prevailed under pressure to stomp the kickflip 50-50 down the Hubba for 6.3 points and the winning score of 19.2 points.

“I’m so happy to be here and this trophy is for my friends, my brother and my dad. That’s it!” said Monster Energy’s Leal upon winning the SLS Championship Tour Stop in Lake Havasu.

Saturday’s win solidifies Leal’s first place on the 2021 SLS season leaderboards at 200 points. It automatically qualifies the Brazilian prodigy directly into the finals of the upcoming SLS Super Crown World Championship in Jacksonville, Florida, in November.

Leal first caught international attention in 2015 at the age of six via a viral video of her heelflipping down a set of stairs dressed in a fairy costume. Although she only started competing at the international level two years ago, the young pro already ranges among the sport’s elite: In 2019, Leal made history as the youngest competitor to ever win an SLS tour stop at age 11 and took second place at the SLS World Championship in Brazil that year. She also won the FAR’n High competition in France and this summer took silver in Women’s Street Skateboarding at the Tokyo Olympics.

The pressure was off the charts for the Men’s Skateboard Street final on Saturday. For the final stop before the SLS Super Crown season finale in Jacksonville, eight top pros were given a last chance to earn qualifier points and secure their trip to Florida. The eight finalists hailed from three countries: Brazil, Canada, and the United States.

Skating for Team USA, Monster Energy’s Huston came to Lake Havasu looking to set the record straight after finishing Stop One of the SLS Championship Tour in Salt Lake City in second place.

Starting his dominant weekend in Friday’s Prelims, the six-time SLS World Champion and current title holder qualified into the final in first place. Competing against 26 elite riders from seven countries, Huston put down a perfect Line laced with difficult tricks like a stylized fakie 5-0 down the rail for 8.3 points. In the Best Trick section, he finessed a switch frontside heelflip tailslide down the Hubba for one of the day’s rare Nine Club scores and a total score of 25.9 points.

The level of skating escalated quickly in Saturday’s final, as Team USA’s Jagger Eaton landed a Nine Club run straight out the gate in the Line section. Unfazed by the competition, Huston responded with a Nine Club routine of his own: switch frontside nosegrind the Hubba, Half Cab kickflip and 360 kickflip the bump, pivot fakie on the quarter pipe, fakie 5-0 overcrook the rail, switch heelflip up the stairs, backside 180 nosegrind the Euro Gap ledge, and a technical nollie backside 180 nosegrind the tall Hubba earned Huston 9.1 points and the lead.

The next-level skating continued into Best Tricks, as riders like Brazil’s Lucas Rabelo earned Nine Club scores by landing big and difficult tech moves. After suffering a heavy slam on his first attempt, Huston regained his focus by posting a frontside Half Cab bluntslide fakie down the tallest Hubba on the course for 8.9 points. After Brazil’s Felipe Gustavo clinched the lead on a Nine Club trick, Huston rose back to the top by finessing a nollie backside 180 nosegrind revert down the Hubba for 8.0 points. Further cementing his lead, Huston spun a Caballerial backside noseblunt slide down the Hubba for 9.3 points; the day’s highest-scoring trick.

As the four top-ranked skaters moved on to their final two attempts, the wild crowd was treated to more Nine Club moves courtesy of Gustavo and American Dashawn Jordan. But when all was said and done, Huston’s 27.3-point overall score proved unbeatable. Taking his final attempt as a victory round, Huston dropped a switch heelflip to 5-0 grind down the Hubba before giving the crowd high fives to celebrate his victory.

“Salt Lake bummed me out a little bit. But my mindset’s always the same; just go out there and do what it takes to win! It’s skateboarding, so you can’t win every event. But you can go out there and give it your all,” said Huston upon winning first place in Lake Havasu. “Every win these days means more and more to me, because I’ve been out here doing it for so long… But I think I’ve got some good years left.”

Saturday’s victory takes Huston to the top of 2021 SLS season rankings with 190 points. Known as the world’s most winning street skateboarder, Huston is the defending back-to-back 2017, 2018, and 2019 SLS World Champion. The only athlete in history to win X Games gold medals on five continents, Huston has won more SLS competitions than any other skateboarder and owns 19 X Games medals, including 13 gold.

Also stoking the Lake Havasu crowd in Friday’s Prelims, 14-year-old Monster Army rider Filipe Mota put his outstanding consistency on technical tricks on full display. Mota strung together a perfect run in the Line section including backside tailslide the tall Hubba, gap to backside lipslide the A-frame, frontside noseslide fakie the stair ledge, as well as kickflip frontside boardslide and bigspin frontside boardslide the rail for 5.1 points. The young prodigy also landed kickflip backside tailslide the tall Hubba and a rare heelflip frontside boardslide the rail in Best Trick, but closely missed the cut into the final eight. But as broadcast commentator Paul Zitzer said about Mota: “In a world of amateur skaters, he is a standout!”

Missed the live stream this weekend? No problem! Fans can go online now and watch the videos featuring all the action from the SLS Championship Tour in Lake Havasu on YouTube. The television showcase was produced by Thrill One Sports and Entertainment, the world’s largest independent action sports company.

What’s next on the SLS calendar? The Big One! As the grand finale, the SLS Super Crown World Championship contest will determine the 2021 men’s and women’s world champions at Jacksonville Landing, Florida, from November 13-14.

About Street League Skateboarding
Since its inception in 2010, Street League Skateboarding (SLS) has propelled street skateboarding from a collection of independent standalone events to a renowned global series. As pioneers of street skateboarding’s premium qualification system and competition format, SLS offers an amateur-to-professional pathway and creates thrilling live events across the globe. The SLS Championship Tour is recognized as the world’s premier professional street skateboarding competition. Events take place on custom-built, one-of-a-kind, SLS-certified plazas in major cities around the world, with the best in the sport competing for the highest stakes. For more information, visit http://www.streetleague.com.

Street League Skateboarding is now part of Thrill One Sports & Entertainment. Thrill One is a next-generation content company that lives at the nexus of sports, entertainment, and lifestyle, combining the resources of Nitro Circus, SLS, Nitro Rallycross and Thrill One Media. A multi-media platform founded in 2020, Thrill One is dedicated to creating mind-blowing action sports events and original content, fueled by the most daring athletes, talent, and brands in thrill-based entertainment. It also boasts one of the largest aggregate social audience in action sports, with over 40 million followers across its multiple brand pages and channels. Go to thrillone.com for additional information.