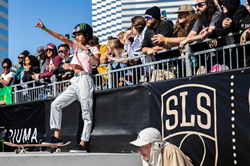 The 2021 SLS season is a wrap! Monster Energy congratulates team rider Rayssa Leal on taking second place in Women’s Street at the SLS Super Crown World Championship 2021 on Sunday. In front of a capacity crowd of 6,000 fans at Riverfront Plaza in Jacksonville, Florida, the 13-year-old from Imperatriz, Brazil, earned her podium spot in the final event of the Street League Skateboarding (SLS) Championship Tour.

At both stops of the season, Monster Energy’s Rayssa soared above the competition and clinched two consecutive wins. As a result, the teenage skateboard prodigy ranked at the very top of the 2021 SLS season leaderboards and qualified straight into Sunday’s final session of the season’s top eight competitors in Jacksonville.

For the Women’s Skateboard Street final on Sunday, the outdoor skatepark at Riverfront Plaza in Jacksonville offered the perfect canvas for world-class skateboarding. Designed by official SLS ramp builders California Skateparks, the course by the St. Johns River featured a multitude of rails, banks, stair sets, and ledges for big and technical skateboarding.

The eight riders in the women’s SLS Super Crown World Championship hailed from Brazil, Japan, the Netherlands, and United States. The elite field included several Olympic competitors and gold medalist Momiji Nishiya, as well as Monster Energy’s Leal as the silver medalist at the 2020 Tokyo Olympics.

Leal started her performance in the final with a strong run in the Line section, including Caballerial backside lipslide fakie the flat rail, gap to backside 5-0 grind the tall Hubba ledge, and a technical frontside bluntslide shove-it on the flat rail. But the flawless routine was cut short by a fall towards the end, sending Leal into Best Trick attempts with a 3.8 point-score in the Line section.

As her competitors posted high Line section scores, Rayssa came under pressure to catch up in Best Trick attempts. And she did! On her first attempt, the Brazilian put down a perfectly poised backside Smith grind down the tall Hubba ledge for 6.0 points. She followed up with a highly technical gap to frontside bluntslide the Hubba for 6.3 points and rose all the way to the top of the leaderboard by landing a gap to backside tailslide the Hubba ledge for 6.0 points.

When the top four riders advanced to the Super Final for two more Best Trick attempts, Rayssa tried to put down a technical kickflip to frontside boardslide down the Hubba but did not stick the landing. This left the door open for Brazil’s Pamela Rosa to hop into first place on the strength of a heavy rail trick. With everything riding on her last trick attempt of the final, she came close to clinching the kickflip boardslide, but could not ride away.

Based on a total score of 19.2 points in the final, Leal ended her SLS Super Crown World Championship 2021 in a strong second place position after having dominated the Street League Skateboarding (SLS) Championship Tour all season.

Rayssa stepped into the international spotlight in 2015 at the age of six via a viral video of her heelflipping down a set of stairs dressed in a fairy costume. The young professional street skateboarder, who only started competing at the international level two years ago, now counts among the world elite: Leal took silver in Women’s Street Skateboarding at the Tokyo Olympics this summer.

In 2019, she made history as the youngest competitor to ever win an SLS tour stop at age 11 and took second place at the SLS World Championship in Brazil that year.

No stranger to high-stakes finals, Huston fired back by stringing together a highly technical routine of his own. Starting his Line section run with a burly gap to backside lipslide the kink rail, Huston posted a frontside Smith grind off the quarter pipe top bar, 360 kickflip the kicker, nollie backside 180 nosegrind the Hubba, and gap kickflip backside lipslide the rail. But a misstep on a kickflip frontside boardslide cost the reigning SLS World Champion precious points, cutting his Line score to 6.8 points.

When the action shifted into Best Trick attempts, Huston missed his initial trick attempt and faced mounting pressure to make his remaining three tricks count. No problem for the world’s winningest street skater. On attempt number two, Huston regained his focus by landing a highly technical Caballerial backside noseblunt slide down the Hubba for 9.0 points.

While most of the riders struggled to land tricks under the weight of the official world championships, Huston followed up by landing a massive gap kickflip to backside lipslide the kink rail (9.2 points). He then secured his spot among the four top-ranked riders in the Super Final by posting a clean kickflip frontside boardslide down the kink rail.

With only two more attempts to go, and top competitors such as Eaton and Brazil’s Lucas Rabelo rising to the top with Nine Club scores, Huston needed a huge score to claim the win. He chose the perfect trick by sending a massive switch frontside heelflip lipslide over the kink rail but could not ride away on his remaining attempts. With a total score of 26.2 points, Huston finished the SLS Super Crown World Championship 2021 in fourth place after holding down the top spot for the entire season.

Also making a strong mark in the final, Olympic silver medalist and Monster Energy rider Kelvin Hoefler stoked the crowd with his signature blend of technical street skating. In the Line section, the 28-year-old from São Paulo, Brazil, strung together a gap to backside lipslide the kink rail, noseblunt on the bank, gap to backside noseblunt slide the rail, nollie frontside nosegrind the Hubba, Caballerial backside tailslide fakie the flat rail, and frontside kickflip the quarter pipe.

But a fall on a kickflip crooked grind ended up cutting Hoefler’s line score to 7.1 points, sending him into Best Trick attempts under pressure. He managed to recover by sticking a gap kickflip to backside lipslide the rail for 8.8 points and difficult frontside kickflip lipslide in the same spot for 8.8 points. But a harsh slam on a gap to sugarcane grind on the rail during his fourth attempt set Hoefler back far enough to finish the final in fifth place.

Earlier in Saturday’s Qualifers, 15-year-old Monster Army rider Filipe Mota held his own as the youngest competitor in an elite field. His Line section highlights included gap to frontside feeble the rail and gap kickflip backside tailslide the Hubba for 4.9 points. In Best Trick, Mota finessed a perfect kickflip backside tailslide shove-it down the Hubba for 8.0 points to end his season with a strong showing.

Speaking of a strong showing, French Monster Energy team rider and Olympics skateboarder Aurelien Giraud had the crowd on its feet. In the Line section, the 23-year-old from Lyon put down a huge gap to frontside feeble the rail, frontside air into the bank, nollie backside lipslide the flat rail, hardflip down the stairs, gap kickflip backside lipslide the rail and a huge 360 kickflip for 7.0 points. In Best Trick, Giraud maintained his momentum by landing a 360 kickflip 50-50 grind the tall Hubba for 8.0 points, followed by the day’s biggest hammer: An ultra-technical gap hardflip to frontside boardslide netted the French powerhouse a 9.5-point score. With a total score to 25.5 points, Giraud emerged from the high-pressure qualifiers in fifth place, missing Sunday’s final by one place.

A big thank you to the entire team at Street League Skateboarding (SLS) for bringing back the SLS Championship Tour after a year-long hiatus in 2020 due to the pandemic.

Missed the live stream this weekend? No problem! Fans can go online now and watch the videos featuring all the action from the SLS Super Crown World Championship 2021 in Jacksonville on YouTube. The television showcase was produced by Thrill One Sports and Entertainment, the world’s largest independent action sports company.

About Street League Skateboarding
Since its inception in 2010, Street League Skateboarding (SLS) has propelled street skateboarding from a collection of independent standalone events to a renowned global series. As pioneers of street skateboarding’s premium qualification system and competition format, SLS offers an amateur-to-professional pathway and creates thrilling live events across the globe. The SLS Championship Tour is recognized as the world’s premier professional street skateboarding competition. Events take place on custom-built, one-of-a-kind, SLS-certified plazas in major cities around the world, with the best in the sport competing for the highest stakes. For more information, visit http://www.streetleague.com.

Street League Skateboarding is now part of Thrill One Sports & Entertainment. Thrill One is a next-generation content company that lives at the nexus of sports, entertainment, and lifestyle, combining the resources of Nitro Circus, SLS, Nitro Rallycross and Thrill One Media. A multi-media platform founded in 2020, Thrill One is dedicated to creating mind-blowing action sports events and original content, fueled by the most daring athletes, talent, and brands in thrill-based entertainment. It also boasts one of the largest aggregate social audience in action sports, with over 40 million followers across its multiple brand pages and channels. Go to thrillone.com for additional information.