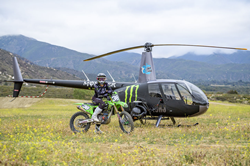 “Honestly, I think I should have won at least one championship, maybe two, by now. I’ve learned a lot and I'm still having fun. Obviously, injuries aren’t fun but winning races and being up front – I love that!” - Austin Forkner

This weekend, the 22-year-old from Richards, Missouri, will start his battle for the national championship in Round 1 of the Lucas Oil Pro Motocross Championship at Fox Raceway in Pala, California. Fully recovered from his recent shoulder injury, the six-time national amateur champion and professional 250 Class Championship contender is ready to bring the heat on May 29.

“Honestly, I think I should have won at least one championship, maybe two, by now,” said Forkner in the new video, adding: “I’ve learned a lot and I'm still having fun. Obviously, injuries aren’t fun but winning races and being up front – I love that!”

Viewers can now go online and watch the new ‘Forkner Style 2’ video on Monster Energy’s official YouTube Channel. The video was filmed in stunning HD quality, including spectacular helicopter shots. Set to the tunes of “Bring Out Your Dead” by California punk rockers Strung Out, the video showcases Forkner’s motocross talent and bike control in a fast-paced edit.

Widely considered as one of the most promising young racers on the circuit right now, Forkner was headed into the 2021 Monster Energy AMA Supercross season as a podium favorite. But after taking second place in Round 1 of the East Coast 250 Super Cross, his season was derailed after a hard fall during Round 3 in Houston, Texas, on January 23. A crash on the moguls section of the track left Forkner with a broken collarbone, ending the Monster Energy Kawasaki rider’s AMA Supercross run prematurely.

This weekend’s opening race in the Lucas Oil Pro Motocross Championship in Pala, California, will mark the first time that audiences get to see Forkner back in the saddle. And he’s still a favorite for the 250 Class title. With the video, filmed on location at Fox Raceway during Forkner’s training in April, the racing phenom provides a rare glimpse into his preparation process before the big event.

Here’s a piece of trivia: The new video is the direct sequel to the original ‘Forkner Style’ edit, released in December 2016. It was filmed at Trey Canard’s motocross Facility in Shawnee, Oklahoma, back when Forkner was still a newly minted Monster Energy Pro Circuit Kawasaki rookie. The first video has garnered more than 400,000 views ever since and counting.

“I can still send it! I look back at some of the stuff I did when I was younger and… I didn't give a sh*t back then, to be honest. Like, I went big,” said Forkner about his earlier video. “I’ve had some injuries now, so I feel like I had to tone it down just a little bit. But when it’s time to throw down, I can still throw down!”

The former rookie pro has come a long way: Nicknamed 'Farm Boy' for his rural upbringing in Missouri, Forkner started racing motocross at the young age of age 5. Raised by a MX racing father and horseback racing mother, the child prodigy soon rose to the top of the amateur leagues. After racking up six AMA Amateur National Motocross Championship titles, Forkner finished his amateur career with wins at Daytona and Freestone. Mentored by five-time Monster Energy Supercross Champion Ricky Carmichael, he turned pro in 2016 and continues to rise as part of the Monster Energy Pro Circuit Kawasaki team. Forkner finished his Monster Energy AMA Supercross seasons in 3rd place in 2019 (East) and 2020 (West). Now he wants the #1 spot, so watch closely!

Watch ‘Forkner Style 2’, live now on Monster Energy’s official YouTube Channel. Also make sure to watch Forkner this weekend in Round 1 of the Lucas Oil Pro Motocross Championship at Fox Raceway in Pala, California, on Saturday, May 29.