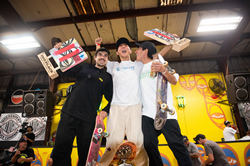 Another chapter of Tampa Am contest history is in the books! Monster Energy congratulates team rider Richard Tury on taking second place at the 27th annual Tampa Am street skateboarding competition on Sunday. In front of a high-energy crowd at Skatepark of Tampa (SPoT) and global audiences tuned in via live stream, the 28-year-old from Kosice, Slovakia, earned his spot on the podium with a perfect run in the ultra-competitive final.

Joining Tury on the podium, 24-year-old Jhancarlos Gonzalez from Bogota, Columbia, finished in third place. In recognition of his strong performance over the entire contest, Gonzalez also earned the Mob Grip ‘Mob G for Effort’ award accompanied by $1,000 in prize money.

Presented by Monster Energy as the official title sponsor, Tampa Am is the world’s most important amateur skateboarding competition. Widely considered as a gateway into the professional ranks, the competition was first held at the SPoT warehouse in 1995. Over the years, several of the world’s most iconic professional street skateboarders have claimed victories at Tampa Am, including Monster Energy rider Aurelien Giraud and multiple SLS World Champion Nyjah Huston.

The 27th edition of Tampa Am once again attracted hundreds of amateur skateboarders from across the globe. A total of 16 countries were represented in the event, including Australia, Brazil, Colombia, Germany, Japan, Norway, the United Kingdom and United States. Rounding out an action-packed weekend of top street skating, skaters also competed in the Concrete Jam bowl contest and Independent Best Trick session.

On Friday, a field of 150 unseeded skaters had the chance to qualify into the competition via the Last Chance Open. Saturday then saw the field of 100 riders cut down to 35 semifinalists in a high-pressure elimination format. Sunday’s semifinals kicked the competition into high gear as riders battled for only ten qualifier spots into the final.

When all was said and done, three Monster Energy riders made the cut: Richard Tury from Slovakia earned his way into the top ten by posting a perfect run, including gap heelflip boardslide the kink rail and heelflip varial to 50-50 the Hubba for 83.78 points. Also making the cut, Columbian team rider Jhancarlos Gonzalez found a perfect line on his last run in the semifinal, including a gap switch backside lipslide the pyramid rail, Caballerial frontside boardslide fakie and switch backside tailslide the Hubba for 83.68 points.

“That was such a wild semifinal, the level of skating is nuts right now,” said SPoT live commentator Andrew Cannon.

The level of skating escalated further in the final when each rider received three runs to post the highest score. Without scores displayed live and only announced in the awards ceremony, the battle for first place continued until very last attempts. Adding to the competitive pressure, a strong Japanese contingent including eleven-year-old phenom Ginwoo Onodera as well as Yukito Aoki and Raimu Sasaki set the bar high by posting ultra-technical tricks.

A long-time member of Monster Energy’s European skateboarding team, Tury is known for his consistency and versatile bag of tricks. Most recently, “Riso” took first place in the Valencia European Skate Open 2021 and second place in the Urban World Series competition in Madrid.

In case you missed this weekend’s live webcast from the Tampa Am 2021 contest, you can watch a full replay on the official Skatepark of Tampa YouTube Channel.

Thanks to Brian Schaefer and the entire crew at Skatepark of Tampa (SPoT) for another epic chapter in Tampa Am history and continuing the world’s most important amateur skate contest.