Back in the winner’s circle! Monster Energy congratulates Rose Namajunas on a hard-earned victory against Jéssica Andrade at UFC 251 on Yas Island, Abu Dhabi on Saturday night. 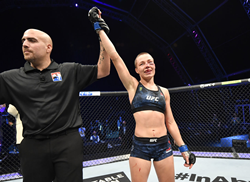 “Early in the fight it was great, but then she turned on the desperation button. She really unloaded on me a couple times, obviously. But I stayed strong,” said Namajunas upon defeating Andrade at UFC 251, adding: “I was just in the right state of mind. That’s everything.”

Back in the winner’s circle! Monster Energy congratulates Rose Namajunas on a hard-earned victory against Jéssica Andrade at UFC 251 on Yas Island, Abu Dhabi on Saturday night. In the main card fight at Flash Forum Arena, the 28-year-old mixed martial arts icon from Milwaukee, Wisconsin, edged ahead in the rematch against Andrade and earned the UFC’s ‘Fight of the Night’ Bonus with a $50,000 payout for her performance.

UFC 251 marks the first successful MMA fighting event contested on Fight Island, a private facility located on Yas Island in Abu Dhabi, the capital of the United Arab Emirates. The pay-per-view event was closed to the public amid extensive safety measures against coronavirus (Covid-19). All athletes and staff prepared for the event in full lockdown at W Hotel surrounded by a 25-kilometer safety zone, with continuous testing to ensure a Covid-19-free “bubble” before fight night.

Anticipation for the rematch between Namajunas and Andrade was high. The two 115-pound fighters had clashed at UFC 237 in 2019, when Andrade dealt Namajunas a devastating defeat and took her UFC Women's Strawweight Championship. Would Namajunas be able to turn the tables on Fight Island?

Nicknamed “Thug” and known for her fast-paced fighting style, Namajunas came to Yas Island fully focused. The fierce fighter with Lithuanian roots had spent the past weeks analyzing her previous loss to Andrade and building her strategy. And it showed!

Straight out the gate, Namajunas took control of the fight and used her 4-inches height advantage to land punishing shots to her opponent’s head from a distance. Namajunas escaped an early clinch with a knee shot before continuing to chip away at Andrade’s defenses with fast jabs. In round two, Namajunas kept setting the pace in the center of the Octagon, evading Andrade’s wild swings and dishing out precise pinpoint jabs.

When the fight moved into round three, Andrade regained her momentum and pressured Namajunas with a barrage of heavy body shots. Standing her ground, Namajunas averted a takedown attempt and responded with fast one-two strike combos, but not without taking considerable damage from brutal shots to the face.

When the intense three-round fight was over, the judges named Namajunas the winner by split decision (two of three 29-28 scorecards). Visibly battered from the clash with Andrade, Namajunas suffered a cut to the bridge of her nose and swollen left eye. In recognition of the grueling fight that went the distance, the UFC awarded both fighters the coveted Fight of the Night bonus with a $50,000 payout.

“Early in the fight it was great, but then she turned on the desperation button. She really unloaded on me a couple times, obviously. But I stayed strong,” said Namajunas upon defeating Andrade at UFC 251, adding: “I was just in the right state of mind. That’s everything.”

Saturday night’s victory marks the first win for Namajunas since losing the UFC Women’s Strawweight Championship belt in May 2019. Back in the winner’s circle, Namajunas has now won four out of her past five fights, bringing her record to ten professional MMA career wins (10-4-0).

What’s next for Namajunas? UFC experts score the victory on Fight Island as a major turnaround after Namajunas had openly considered retirement upon losing her title to Andrade. On the strength of her win, journalists see Namajunas next in line for a title fight against reigning UFC Women’s Strawweight Champion Zhang Weili, and a chance to become her division’s first two-time champion. Namajunas had originally claimed the title in November 2017 and said in Saturday’s post-fight interview that she would welcome the opportunity to get it back before the end of this year. Stay tuned!

In Saturday night’s Main Event, Monster Energy’s Jorge “Gamebred” Masvidal went the distance in the UFC Welterweight Championship title fight against defending champ Kamaru Usman. Initially, Gilbert Burns was planned to face Usman in the title match, but had to pull out after testing positive for Covid-19. On a mere six days’ notice, Masvidal stepped in to take a shot at dethroning Usman, although it required cutting 20 pounds and traveling to Abu Dhabi on short notice. Masvidal came into the fight swinging, pressuring Usman with hard fists and lethal leg kicks to win the first round. But as the fight drew on, Usman used takedowns and ground wrestling to overpower Masvidal, who still fought competitively for the entire five rounds. When all was said and done, Usman defended his title by unanimous judges’ decision.

Thanks to Dana White and the UFC for showcasing a world-class event despite the challenges of the global coronavirus pandemic and writing MMA history this weekend on Fight Island, Abu Dhabi.