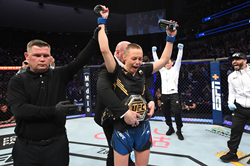 “I did it again! But God did it, man. I really just had to have faith in him and that’s what got me through." Rose Namajunas

A historic night for mixed martial arts (MMA) is in the books! Monster Energy congratulates Rose Namajunas on her spectacular win in the title fight against UFC Women’s Strawweight Champion Weili Zhang at UFC 261 in Jacksonville, Florida. In front of a capacity crowd of 15,000 fans at VyStar Veterans Memorial Arena, the 28-year-old from Milwaukee, Wisconsin, claimed the belt with a thunderous knockout victory in Round 1 and earned the UFC’s Performance of the Night bonus.

Also on the Main Card, Monster Energy’s Valentina Shevchenko successfully defended her UFC Women’s Flyweight Championship title against Jéssica Andrade from Brazil. On the strength of her grappling skills, the 33-year-old from Bishkek, Kyrgyzstan, dealt her challenger a stunning TKO loss in the second round.

UFC 261: Usman vs. Masvidal 2 marked the UFC’s return to live events after a year of closed-to-the-public fights in response to the Covid-19 pandemic. With three championship titles on the line, UFC 261 happened amid enhanced safety protocols to curb the spread of Covid-19, including pre-fight quarantine for athletes and personnel and extensive testing for the coronavirus to create a safe environment.

Rose “Thug” Namajunas (11-4) came to Jacksonville as the former UFC Strawweight Champion looking to reclaim her title. Namajunas had originally earned the championship in November 2017 and lost the belt in a fight against Jéssica Andrade at UFC 237 belt in May 2019. In Chinese MMA icon Weili Zhang (21-2), the reigning Strawweight division champion since August 2019, Namajunas faced a formidable adversary with 21 consecutive professional MMA wins to her name.

But past achievements held no weight once the 115-pound title fight got underway at VyStar Veterans Memorial Arena. Namajunas targeted Zhang with quick jabs while defending against low leg kicks. Then it happened quickly: Just past the one-minute mark, Namajunas blasted through Zhang’s guard with a surprise head kick. The perfectly timed left leg caught the champion right on the jawline, dropping her to the canvas.

Namajunas followed up with a set of hammer fists before referee Keith Peterson stopped the fight at 1:18 minutes with the American as the new two-time UFC Strawweight Champion. Namajunas also earned the UFC’s Performance of the Night bonus for her dominant victory.

“I did it again! But God did it, man. I really just had to have faith in him and that’s what got me through,” said Namajunas upon claiming the 115-pound championship belt at UFC 261 in Florida.

Saturday night’s victory brings Namajunas full circle after losing the UFC Women’s Strawweight Championship belt in May 2019. Namajunas now holds the record for most stoppages in the division at five, bringing her record to eleven professional MMA career wins (11-4-0). Asked about a potential rematch against Zhang, the newly minted champion said: ”We’ll talk about it. It’s understandable that [Weili] is pretty upset about how quickly it went and everything like that. So, I’d be open to it, and we’ll have to see.”

Right from the start, Shevchenko overpowered her opponent with fast and accurate strike combinations and brutal kicks. Andrade tried to respond with takedowns but was unable to bring Shevchenko to the mat. What’s more, Shevchenko unveiled a previously underused skill: dominant grappling.

After a flawless first round in which she kept her opponent out of punching range, Shevchenko caught Andrade in a crucifix position lock that spelled the beginning of the end for the Brazilian. With Shevchenko raining elbows and punches to the head, referee Dan Miragliotta called a TKO stoppage to the fight at the 3:19 mark of Round 2. Having successfully defended her title for the fifth time, Shevchenko has now been champion since December 2018.

“Opponents trying to figure out a weakness of mine. Don’t waste your time. There is none,” said Shevchenko upon defending the UFC Women’s Flyweight title at UFC 261. “I like to surprise people. I can do everything. My plan was to come into the Octagon and destroy my opponent.”

Speaking on future bouts in her post-fight interview, Shevchenko said: “Here I am, anyone who is asking to fight me. Here I am!”