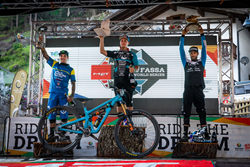 I’m happy with how I rode, I felt like I was able to attack on all of the stages and it was a step in the right direction for my season so far this year. Sam Hill

Under a scalding Italian sun, the high alpine trails of the Dolomites set a spectacular backdrop for the Australian’s return to the podium as he blew apart the dusty race tracks and deep loam of the Val di Fassa bike park in a fantastic day of racing. Located around 200km from Milan, the Fassa bike park served riders a variety of long alpine stages featuring a mixture of natural trails from steep and loose, to meandering, high-speed single track through alpine meadows in the shadows or through soaring Italian peaks.

Hill was able to take a stage win and three other stage top three finishes, which firmly put him into the silver medal position. His only disappointing finish was on stage 2, which was the shortest stage of the day.

“Round 4 of the EWS here in Canazei, Italy was awesome,” said Hill. The tracks had a good variety of technical and fast sections and the scenery being surrounded by the Dolomites made it an unreal place to race. I’m happy with how I rode, I felt like I was able to attack on all of the stages and it was a step in the right direction for my season so far this year.”

With this second place podium finish, Hill now moves into second place in the overall rankings mid way through the season. With four more EWS races on the calendar, the 2018 champion has set himself up in the perfect spot to attack in the points standings and defend his title for another championship win.

The next Enduro World Series event takes place on July 6 and 7 in Les Orres, France.