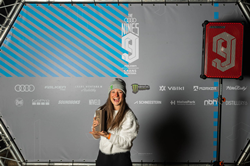 They came, saw, and conquered! Monster Energy congratulates freeski team rider Sarah Hoefflin on taking the top spot as women’s ‘Ruler of the Week’ at the Audi Nines snow sports media event in Crans-Montana, Valais, Switzerland. During the four-day progression session featuring the world’s best freestyle snowboard and freeski athletes, the 30-year-old from Geneva, Switzerland, was voted the top performer by a panel of fellow competitors.

Since its debut in 2008, Audi Nines has brought together elite riders in a spirit of collaboration and progression at the world’s best ski resorts. Every year, the invite-only event serves as a grand finale at the end of the official snow sports contest season. It’s that perfect time when riders are in peak shape, on top of their tricks and creativity flows freely.

This year’s edition found a new home at premium Crans-Montana resort after the 2020 edition had been cancelled due to the pandemic. Contested without spectators and amid stringent safety measures, Audi Nines 2021 featured nonstop riding sessions on an innovative playground of finely sculpted snow features.

Monster Energy’s Hoefflin came to Audi Nines fresh off a silver medal at the FIS World Cup finals in Silvaplana in March. Digging deep into her versatile bag of tricks, the Olympic gold medalist worked the course all week long with creative transfers and stylish airs.

When all was said and done, the panel of participating riders voted Hoefflin as the women’s ‘Ruler of the Week’ in the Freeski category for her strong showing at Audi Nines 2021. During the entire competition, the 30-year-old Swiss native went bigger and further than the rest of the pack, including transfer airs into the towering quarter pipe at the center of the course, rightside 720s and huge switch 900s over the kicker and 180 nosebutter 360 out on the knuckle.

After winning Audi Nines 2021, it’s safe to say that Hoefflin had a stellar 2020/21 season. The 30-year-old from Switzerland finished in third place overall and in the Slopestyle category in the FIS World Cup rankings. Hoefflin came into professional skiing relatively late in her career after earning her neuroscience degree in 2013. She surprised the freeski scene by winning Women’s Ski Big Air at Aspen 2018 and that same year claimed the gold medal in slopestyle at the Winter Olympics in Pyeongchang, South Korea. Her segment in the Faction Ski Team movie ‘The Collective’, earned the Best Female Edit trophy at the Newschoolers Skier of the Year Awards.

Over in the snowboard category, one rider soared above the rest when it came to slaying the challenging Audi Nines course: Monster Energy’s De Buck had a trick for every angle of the park. He twirled effortless frontside 360s to nose tap on the giant snow sphere and hoisted massive double cork 1080 spins and contorted frontside nosebone 540s as well as side-spinning nosegrab 900s over the step-up. At the end of a long week of heavy riding, the vote for the Men’s ‘Ruler of the Week’ award went to the Belgian ripper.

The win at Audi Nines is a career-first for De Buck. The well-traveled freestyle snowboarder is better known for his creative video parts than his competition results. Measuring a solid 6 foot, 4 inches in height, he ranges amongst the tallest pro snowboarders on the circuit. He’s also considered one of the most creative and stylish riders, especially revered for his technical switch-stance skills.

Aside from best performance awards, the jury also handed out trophies for Best Trick achievements. Walking away with an award in Women’s Freeski, 28-year-old Ballet-Baz from Fontaine-lès-Dijon, France, had a banger of a move for the technical course: A high-flying and clean cork 900 stale grab over the jump obstacle earned the award for best move of the four-day event.

Catching Ballet-Baz in a competition is a rare sight. Although she has previously won first place in Big Air at Audi Nines 2017, among other competitions, the native of Vienne, France, is focused on pushing the boundaries of freeskiing in video projects. Most recently, Ballet-Baz envisioned and starred in the 100% female ski movie titled ‘Skivas’, premiered in December 2020.