Monster Energy congratulates Sergio “The Phenom” Pettis on his stunning knockout victory against Kyoji Horiguchi at Bellator 272 on Friday night. 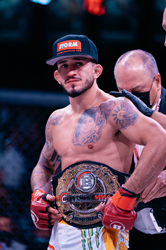 “I was just like, ‘Man, I’m losing this fight. I’ve got to do something spectacular.’ And it came out at the right time,” - Sergio Pettis

And still the champion! Monster Energy congratulates Sergio “The Phenom” Pettis on his stunning knockout victory against Kyoji Horiguchi at Bellator 272 on Friday night. In the Main Event fight at Mohegan Sun Resort and Casino, the 28-year-old from Milwaukee, Wisconsin, finished his opponent with a spectacular one-punch knockout in Round 4 to defend his Bellator MMA Bantamweight Championship title.

As the last event of the 2021 Bellator MMA, Bellator 272 - Pettis vs. Horiguchi was contested in front of a live audience inside The Mohegan Sun Resort and Casino in Uncasville, Connecticut. The Main Card was broadcast on Showtime, the Monster Energy Prelims streamed live on YouTube.

Monster Energy’s Pettis (22-5) came into the fight as the defending champion. In May 2021, the mixed martial artist training at Roufusport MMA Academy earned the Bellator MMA Bantamweight Championship via decision victory against his Monster Energy teammate Juan Archuleta at Bellator 258.

On Friday night, Pettis faced a tough challenger in former bantamweight division titleholder Kyoji Horiguchi (29-3). Fighting out of Takasaki, Japan, the 31-year-old is the current 135-pound champion in the Rizin Fighting Federation promotion. Horiguchi had earned the Bellator Bantamweight title in 2019 but was forced to vacate the belt because of a knee injury.

As the night’s headline fight started at The Mohegan Sun, Horiguchi left no doubt that he wanted his belt back. Returning from a twelve-month hiatus, the Japanese fighter pressured Pettis straight out the gate, landing damaging strikes and taking the champion to the canvas with flawless takedowns.

Pettis fired back with an upkick from the ground in Round 2, opening a cut below his challenger’s right eye. But for the majority of the fight, Horiguchi dominated and looked poised for a decision victory, leading in striking totals by a massive margin of 73-19. The dominance ended when the fight’s key scene unfolded in Round 4: After Pettis closely missed a high kick to Horiguchi’s head, the reigning champ swiftly fired a spinning back fist with his left that knocked his opponent out cold.

At 3:24 minutes, referee Todd Anderson stopped the main event fight with Pettis retaining his Bellator MMA Bantamweight Championship title. Already counted as a contender for ‘knockout of the year’, the brutal finish ended the season with a spectacular come-from-behind victory.

“I was just like, ‘Man, I’m losing this fight. I’ve got to do something spectacular.’ And it came out at the right time,” said Monster Energy’s Pettis upon defending his 135-pound division title at Bellator 272 on Friday night. “I needed to face some adversity and tonight, Horiguchi gave me all of that.”

What’s next for Pettis? In his post-fight interview, the champion shared plans to return to training immediately: “I had a tough time picking up his timing and rhythm. I’m only 28 and this fight showed me that I still have a lot to work on. I will be back in the gym soon.”

Looking ahead, Pettis will compete in the eight-man Bellator MMA Bantamweight World Grand Prix in 2022 for the 135-pound title and a $1 million prize.

Friday night’s victory marks the first successful Bellator MMA Bantamweight Championship title defense in Pettis’ career. It’s also the fifth consecutive MMA career win for Pettis and fourth overall since leaving the Ultimate Fighting Championship (UFC) to sign with Bellator in 2019. During his run in the UFC, Pettis had earned victories against top fighters such as Joseph Benavidez, Brandon Moreno, and John Moraga. The younger brother of Anthony Pettis, a former UFC and WEC Lightweight champion, Pettis became a professional MMA fighter at the age of 18.