We have a new Bantamweight World Champion! Monster Energy congratulates Sergio Pettis on his decision victory in the Bellator MMA title fight against Juan Archuleta at Bellator 258 on Friday night. 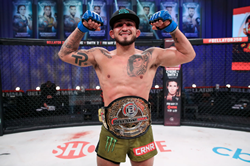 “It feels great. [Anthony] has been telling me I’m one of the best of the world ever since I started this, so to finally win my own belt feels like a dream come true." - Sergio Pettis

We have a new Bantamweight World Champion! Monster Energy congratulates Sergio Pettis on his decision victory in the Bellator MMA title fight against Juan Archuleta at Bellator 258 on Friday night. In the headline bout inside Mohegan Sun Arena in Uncasville, Connecticut, the 27-year-old MMA icon from Milwaukee, Wisconsin, took the title from his Monster Energy teammate by unanimous decision (50-45, 49-46, 49-46) after Round 5.

Bellator 258 Archuleta Vs. Pettis was contested as a closed-to-the-public event inside the main home of Bellator MMA since the onset of the global coronavirus pandemic: The Mohegan Sun Resort and Casino in Uncasville, Connecticut. The Main Card was broadcast on Showtime, the Monster Energy Prelims streamed live on YouTube.

The anticipation for Friday night’s title fight between the two bantamweight legends was high. Bellator 258 marked the first title defense for Juan “Spaniard” Archuleta (25-3) since earning the Bellator Bantamweight championship with a victory over Patrick “Patchy” Mix at Bellator 246 in September 2020. His challenger, Sergio “The Phenom” Pettis (21-5), stepped into the Octagon on a three-fight winning streak after dismantling Tyson Nam, Alfred Khashakyan, and Ricky Bandejas. In the epic clash between two Monster Energy fighters, there could only be one winner.

After a tentative start, Juan Archuleta and Pettis engaged in a wild exchange in the opening round, with Pettis landing clean shots, especially a right hand that would prove a key asset in the title fight. In the second round, Pettis opened up a cut on the defending champion’s forehead and kept responding with precise counter punches. Archuleta landed explosive combinations and body shots in the third round, but Pettis resisted his takedowns. During a key moment in Round 4, Archuleta fired a flurry of fast strike combos, only to take a heavy counter right hand to the head that wobbled him.

With Pettis taking the upper hand in previous rounds, Archuleta needed a submission or knockout to save his belt in Round 5. But the challenger showed exceptional grappling defense – although Archuleta landed an impressive slam in the final round – and fired back with speedy counter-striking until the very end. When all was said and done, the judges named Pettis the winner – and new Bellator MMA Bantamweight World Champion – by unanimous decision (50-45, 49-46, 49-46).

“I knew I was just getting the better of the exchanges. He hit me with good shots, but I could tell that my shots were landing cleaner. I was just flowing and it's my night. My takedown defense was on point,” said Monster Energy’s Pettis upon claiming the Bellator Bantamweight title on Friday.

Before joining the Bellator MMA promotion in 2019, Pettis had a strong run in the Ultimate Fighting Championship (UFC) during which he took out world title contenders such as Joseph Benavidez, Brandon Moreno, and John Moraga. As the younger brother of Anthony Pettis, a former UFC and WEC Lightweight champion, Pettis became a professional MMA fighter at the age of 18. Friday night’s 135-pound title win is the biggest achievement in Pettis’ career (21-5).

“It feels great. [Anthony] has been telling me I’m one of the best of the world ever since I started this, so to finally win my own belt feels like a dream come true. Big thank you to Juan Archuleta for this opportunity and for the fight. You’re a tough athlete, a great father and thank you for everything,” said Pettis.

Asked about his next fight, Pettis announced plans to challenge the Rizin promotion’s current Bantamweight champion Kyoji Horiguchi. “I would also like to call out Horiguchi. I would love to represent Bellator versus Rizin and it would give me a great opportunity to get my second belt,” said Pettis.

Thanks to Bellator MMA and Mohegan Sun for showcasing a world-class fighting event amidst the adversities of the global coronavirus pandemic.