Monster Energy congratulates Sergio “The Phenom” Pettis on his victory over Ricky Bandejas in the main event fight at Bellator 242 inside Mohegan Sun Arena in Uncasville, Connecticut, on Friday night. 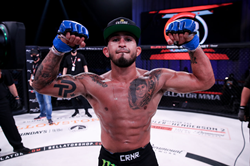 “I don’t know if it was a statement for a title shot. I think it was just another good win on my resume. I beat a tough Ricky Bandejas.” Sergio Pettis

Monster Energy congratulates Sergio “The Phenom” Pettis on his victory over Ricky Bandejas in the main event fight at Bellator 242 inside Mohegan Sun Arena in Uncasville, Connecticut, on Friday night. In the bantamweight division bout, the 26-year-old from Milwaukee, Wisconsin, was named the winner by unanimous decision after maintaining the upper hand for three rounds.

In the main card’s opening fight, Monster Energy’s Aaron Pico continued his winning streak by forcing his opponent, Solo Hatley Jr., into early submission in round one of the featherweight division bout with a rear-naked choke from behind.

Bellator 242 marked the promotion’s first MMA live event since stopping operations due to the global coronavirus pandemic in March. The Mohegan Sun resort and casino hosted Bellator 242 amid extensive COVID-19 safety protocols for staff, officials and fighters, and is also scheduled to showcase Bellator 243 on August 7.

Pettis (20-5) stepped into his first Bellator main event fight with confidence after stopping Alfred Khashakyan at Bellator 238 in January. But Pettis found a worthy adversary in Bandejas (13-4) from Brick, New Jersey, who came to Connecticut on a two-fight win streak.

Controlling the pressure from the start, Pettis pursued Bandejas with precise strikes and punishing low kicks. Although Bandejas landed a swift takedown in round one, Pettis was quick to counter with a face kick and continued to set the pace. After visibly damaging Bandejas’ lead leg, Pettis shut down a final round push to turn the tide with fast footwork and clean counter strikes. After claiming all three rounds, Pettis was named the clear winner by unanimous decision (30-27).

Friday night’s victory marks Pettis’ second consecutive victory since signing with Bellator (20-5 MMA overall) and 13th career decision win. Asked whether he would have preferred a knockout against Bandejas, Pettis said in the post-fight interview: “Obviously I want to start finishing people more and more. Ricky was tough, man, so I had to play a smarter game plan and I went out there and did what I had to do, but there’s more to come.”

So, what’s next for the younger brother of MMA icon Anthony Pettis? Because Bellator 242 was touted as a title eliminator in the bantamweight division, insiders expect Pettis to take on the victor of the upcoming fight between Juan Archuleta and Patchy Mix for the vacant bantamweight title, preferably before the end of the year. Addressing the issue, Pettis told reporters on Friday night: “I don’t know if it was a statement for a title shot. I think it was just another good win on my resume. I beat a tough Ricky Bandejas.”

Earlier on Friday night, the Bellator 242 main card opened with a fast-paced featherweight bout between Monster Energy’s Aaron Pico from Whittier, California, and Hatley Jr. from Arkansas. Pico, who trains at Jackson Wink MMA Academy in Albuquerque, New Mexico, stepped into the octagon on the strength of a knockout victory at Bellator 238 against Daniel “Scary” Carey.

Wasting no time, Pico rushed Hatley Jr. to land an early takedown. The 23-year-old MMA prodigy, who was initially tracked for an Olympics career because of his wrestling skills, then continued to dominate from the top. Raining strikes from above and keeping his opponent pinned down, Pico improved his position and waited for an opening to seal the deal. He found it when Hatley Jr. exposed his back enough for clinching a rear-naked choke to end the fight via submission at 2:10 minutes.

“My coaches helped me through this. Greg Jackson really slowed it down for me. I love the sport and they have really helped me,” said Monster Energy’s Pico upon winning the main card featherweight fight at Bellator 242.

The main card victory over Hatley Jr. marks the first submission win for Pico (6-3), who single-handedly earned all of his previous career victories by knockout. Pico made his Bellator debut in 2017 as one of most critically acclaimed prospects in the history of the franchise but had to face two losses in 2019. Now, with his second consecutive victory, he remains in the winner’s circle as one of the young fighters to watch on the MMA circuit.

Congratulations to both Monster Energy fighters on their double win at Bellator 242. Also thank you to Bellator and Mohegan Sun for showcasing a world-class fighting event amidst the adversities of the global coronavirus pandemic.