Talk about an epic performance! Monster Energy congratulates its team of freeski and snowboard athletes on dominating the podiums at the Land Rover U.S. Grand Prix at Mammoth Mountain, California, on Saturday. 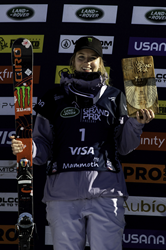 "I wanted to come here and have fun, but I’m so competitive that I can’t just come out here and have fun! I’m happy to be on top and also happy that everybody’s okay. The whole thing went down on the most beautiful day we’ve ever had in Mammoth for a final!” Cassie Sharpe

Talk about an epic performance! Monster Energy congratulates its team of freeski and snowboard athletes on dominating the podiums at the Land Rover U.S. Grand Prix at Mammoth Mountain, California, on Saturday.

Once again, the U.S. Grand Prix at Mammoth Mountain showcased the state of the art in freestyle ski and snowboarding. Over the course of four days, the world’s best winter sports athletes competed for FIS World Cup points and a total of $400,000 in prize money in the Land Rover U.S. Grand Prix at Mammoth Mountain. The nationally televised contest features nearly 130 elite freeskiers and over 100 snowboarders.

At the end of an action-packed weekend, Monster Energy athletes claimed a whopping five wins, as well as one second-place finish and one third-place finish in a dominant performance at this legacy snow sports event.

Here’s how the action unfolded on Saturday in Slopestyle and Halfpipe events across freeski and snowboard disciplines:

In the Women’s Snowboard Slopestyle final, Monster Energy’s Jamie Anderson came looking for the top spot after taking home gold in the discipline at X Games Aspen 2020 the previous weekend. The 29-year-old from Lake Tahoe, California, went head-to-head against seven of the world’s best riders hailing from Belgium, Canada, Norway, as well as the Netherlands, United Kingdom and United States.

Amidst blue skies and perfect slope conditions, the most decorated woman in snow sports put on a perfect show of style and versatility in her first run.

Jamie Anderson worked the rail section with a stylish backside lipslide, followed by a boardslide the entire kink rail before launching a boardslide to 270 off on the tall rainbow rail. In the jump section, she pulled alley-oop backside 540 Indy grab, cab 540 mute, and frontside 720 mute grab for the highest score of the day at 83.40 points and the win.

“I’m really stoked! It was super fun and I’m happy to be back in Mammoth. The U.S. Grand Prix did a really great job and we scored with the weather. No wind, sunny and the park was riding good!” said Jamie Anderson upon taking first place in Women’s Snowboard Slopestyle in Mammoth today.

Following her victory at Mammoth Mountain, Jamie Anderson now sits in third place on the International Ski Federation (FIS) 2019/20 Snowboard World Cup season leaderboards. The two-time Olympic Gold medalist is also podium-perfect in 15 appearances at X Games and owns a total of 17 medals (6 Gold, 7 Silver, 4 Bronze). As of last weekend, Anderson has surpassed Shaun White and Mark McMorris for the record of holding the most Snowboard Slopestyle gold in X Games history at six medals.

The Men’s Snowboard Slopestyle final saw a new generation of riders take over the top of the leaderboard. When all was said and done, three riders at 18 years of age and younger claimed the podium spots. Leading the pack was Monster Energy’s Dusty Henricksen from Mammoth Lakes, California, who took home the win and his first World Cup podium on his 16th birthday.

As the latest addition to the Monster Energy snowboarding team, Henricksen knows the slopestyle course at Unbound Parks like few other riders. The local ripper hit every obstacle with style and control, as he stomped a perfect routine on his second and final run of the day: Henricksen started in the rail section with a front 270 to 270 off, followed by a hardway Cab 270 back lip on the kink rail, and a boardslide to 270 tailgrab popped high off the tall rainbow rail.

In the jump section, Dusty Henricksen hucked a front double cork 900 double grab off the first jump before sending a Cab double 1260 nosegrab and backside triple 1440 mute off final jump for 84.51 points. Cheered on by his hometown crowd, the birthday boy took home first place and the first World Cup podium of his young career.

As a member of the U.S. Snowboard Rookie Team, Dusty Henricksen is having a banner year so far. He came to Mammoth fresh off of a gold medal at the Youth Olympic Games Lausanne 2020 and now commands first place on the FIS 2019/20 Snowboard World Cup season rankings. Keep an eye on this kid in 2020!

When the contest moved into the Women’s Freeski Halfpipe final, the woman to beat was last year’s winner and Monster Energy athlete Cassie Sharpe. The 27-year-old from Comox, Canada, had suffered a concussion at the season opener in Cardrona in September 2019, which sidelined her from the first two World Cup events of the season. She returned to competition at X Games Aspen 2020 one week ago but struggled with the event’s new scoring format and had to settle for bronze in the Ski SuperPipe final.

All that was forgotten when Cassie Sharpe stepped into the eight-rider final under clear skies on the 22-foot tall halfpipe at Unbound Parks. Facing heat from Russia’s Valeriya Demidova, Sharpe put down a perfect run that brought her back into the winner’s circle: With signature flow and high altitude, Sharpe landed a rightside 900 into a huge left 900 tailgrab, followed by a right 720 safety grab to fakie, switch 360 mute, a perfectly executed flair and a high-flying rightside 1080 tailgrab on the last wall for a 90.00-point score and first place.

“I wanted to come here and have fun, but I’m so competitive that I can’t just come out here and have fun! I’m happy to be on top and also happy that everybody’s okay. The whole thing went down on the most beautiful day we’ve ever had in Mammoth for a final!” said Cassie Sharpe upon winning the Women’s Freeski Halfpipe final in Mammoth today.