Get ready for a BIG podcast episode! Monster Energy is proud to announce the release of Episode 6 of the alternative sports and pop culture podcast Unleashed with The Dingo and Danny featuring record-setting power lifter and YouTube personality Jake Johns “Big Boy.” 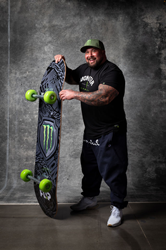 “Don’t be afraid to try new things! Everybody only wants to do what they’re good at. They’re afraid to get out of their comfort zone, whether it’s being embarrassed or not being good at it. You gotta get past that mindset,” - Big Boy

Get ready for a BIG podcast episode! Monster Energy is proud to announce the release of Episode 6 of the alternative sports and pop culture podcast Unleashed with The Dingo and Danny featuring record-setting power lifter and YouTube personality Jake Johns “Big Boy.” This latest one-hour installment welcomes the 325-pound athlete known for his feats of insane human strength, legendary workouts, and skateboarding stunts.

“Don’t be afraid to try new things! Everybody only wants to do what they’re good at. They’re afraid to get out of their comfort zone, whether it’s being embarrassed or not being good at it. You gotta get past that mindset,” said Big Boy on the new podcast episode.

Prepare for a no-holds-barred conversation as the two podcast hosts, Australian action sports personality Luke “The Dingo” Trembath and professional snowboarder Danny Kass, sit down with the 335-pound athlete from San Clemente, California. The episode is now streaming on all major platforms, including Spotify, iTunes and YouTube.

Fans can now tune in for a grounded interview with the YouTube superstar whose viral videos have racked up millions of views. Having started from humble beginnings, Big Boy today commands a loyal audience of 696K Instagram followers as well as 600K subscribers and 4.1 million likes on TikTok.

Big Boy initially rose to fame as one of the world’s top powerlifters and holds several national and worldwide records, including an American record for bench pressing 589 pounds in 2015. Big Boy also maintains close ties to mixed martial arts (MMA) and can be found on social media working out with legendary UFC fighters, pumping iron alongside the world’s strongest powerlifters, and sharing workout tips from the hottest gyms in SoCal.

But he also reveals on the podcast that he had nothing more to prove in the world of competitive powerlifting. “I felt like I’d reached my peak. I was the number one in the world three years ago at power lifting. After that it was where do I want to go from there? I wanted to grow my social media more.”

In search of new challenges, Big Boy discovered his passion for skateboarding, which has become a strong focus. “I’ve definitely put the lifting on the back burner especially since I’m not competing right now. Going with the flow and having fun and trying to be the bigger dude dabbling into different things.”

With the rare ability to transcend the boundaries between weightlifting and board sports, Big Boy has a strong athlete’s body and a concrete surfer’s soul. Aware of his physique, he consciously serves as a role model for plus-sized athletes. “A lot of the bigger guys see me being able to lift and skate and run, so it inspires them to be able to do that as well. Being big, you have a stigma. Like, ‘He’s slow. He’s not athletic.’ Or, especially with powerlifting, ‘He’s just strong,’” said Big Boy, adding: “I’m going with the flow and having fun and trying to be the bigger dude dabbling into different things.”

Going with the flow has worked for “Big Boy.” Today, he is constantly rubbing shoulders with skateboard super stars and shredding their private training facilities. His drop-in on skate icon Tony Hawk’s 13.5-foot vert ramp (and resulting slam) has attracted more than 1 million YouTube views, his most viral video to date and most painful skateboarding accident. “That was for sure the hardest hit I’ve ever taken. Whether it was a punch or in football. The hardest hit! It’s like a two-story building fall!” said Big Boy while reliving the moment on the Unleashed podcast.

Asked about the secrets to building viral fame on the internet, Big Boy offered: “Don’t be afraid to step outside the box. Dropping on the Tony Hawk ramp went way more viral than lifting 1000 pounds.”

For the whole story – and an epic arm-wrestling match between Big Boy and podcast host Danny Kass – tune in to Episode 6 of the Unleashed with The Dingo and Danny Podcast now. Visit the show’s landing page for the new episode featuring “Big Boy.”

Filmed on a special set inside Studio M at Monster Energy headquarters in Corona, California, the podcast is hosted by the dynamic duo of Australian action sports personality Luke “The Dingo” Trembath and professional snowboarder Danny Kass. Known for their deep roots in action sports culture, the two starred in the beloved cult TV show ‘The Adventures of Danny and The Dingo’ on Fuel TV for five action-packed seasons in the early 2010s. Both hosts have walked the walk as pro snowboarders and possess the interview skills to find common ground with guests from any type of background – sports and pop culture. Always look out for new episodes dropping bi-weekly on Mondays.

What’s coming up next the Unleashed with The Dingo and Danny Podcast? On Monday, May 31, the show will welcome BMX trailblazer and Monster Energy athlete Pat Casey for Episode 7. Prepare to get the inside scoop from the inventor of tricks like the fakie cashroll and proud builder of the legendary Dreamyard ramp facility with a corresponding web video series. A must-listen for BMX fans!