Monster Energy is proud to welcome freestyle motocross trailblazer and 15-time X Games from Jarryd McNeil on Episode 41 of the sports and pop culture podcast UNLEASHED with The Dingo and Danny. 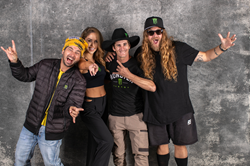 Get ready for a rider who walks the walk and talks the talk! Monster Energy is proud to welcome freestyle motocross trailblazer and 15-time X Games from Jarryd McNeil on Episode 41 of the sports and pop culture podcast UNLEASHED with The Dingo and Danny.

Recorded inside Monster Energy headquarters in Corona, California, this new 57-minute episode gets inside the mind of the 31-year-old Moto X phenomenon and nine-time X Games gold medalist. In an unparalleled career, McNeil made history by claiming the most X Games medals in the Best Whip discipline and earning the record as the most decorated Australian athlete at X Games.

When he first came on the American freestyle motocross circuit as a relatively unknown rider, the welcome was not always friendly. “I kind of struggled with riders trying to hate on me. I was like, ‘Why… I’m just trying to make a career in the U.S.,’ said Monster Energy’s McNeil on UNLEASHED. But gradually, he built respect. “People realized, ‘This guy has bike skills. He’s not just a whip kid.’”

For a full look at what drives the exceptional athlete and recent father, fans can now tune in to Episode 41 of UNLEASHED featuring Jarryd McNeil. Released today, the new podcast is streaming on all major platforms, including Spotify, iTunes, and YouTube.

Growing up in rural Kerang, Australia, Jarryd McNeil was raised riding dirt bikes for transportation on his family’s dairy farm. He soon developed a need for speed and competed as a motocross racer in the junior leagues. But at age 18, McNeil flipped a switch and began experimenting with freestyle aerials. This set the course for a milestone-heavy career, as the Australian upstart began dominating the Best Whip and Step Up disciplines at X Games, so far capturing nine gold medals across both events. His current record of 15 X Games medals makes him the most decorated Australian athlete at X Games – and the newly minted dad is far from finished!

Asked about his upbringing, McNeil said he feels most rooted in the countryside of Victoria, where he was born. “I’m a country boy at heart, so I represent the countryside with the hat and all that,” said McNeil, who often gets mistaken for a professional bull rider at airports. He did not envision a career in freestyle motocross – although he had been riding dirt bikes as a young kid.

Initially, McNeil started racing in the junior motocross leagues in 1999. “We were always traveling. I had a really successful racing career as an amateur. Won the Australian championship and was the fastest amateur in 2007. Went into my pro years and didn’t have the support I needed,” McNeil remembers.

After doing halftime shows performing freestyle tricks at Super X events to make money, he decided to go all-in on trick riding at age 17. There was no turning back from there. He joined the Crusty Demons tour alongside fellow young upstart Jackson Strong. “We were the grommets on tour. We definitely did a lot of shows and events at that time.”

Once he got rolling as a freestyle rider, McNeil became almost unbeatable. He was first invited to X Games in 2010 and instantly reached the podium with second place in Best Whip. At X Games Austin 2015, he clinched his first gold medal in Best Whip and started a dominating run that also included the highest air records in the Step-Up discipline.

He is now tied for most X Games gold – nine gold medals – in motocross with Travis Pastrana. “There have been a few medals, and I’ve only been in X Games twelve years. So, looking at it that way, every year I pretty much got two medals,” said McNeil on UNLEASHED.

In another record-setting feat, his 15 total X Games medals are the most for any Australian athlete. At X Games Austin 2016, he achieved a personal milestone: Double gold medals in Best Whip and Step Up. “It was two gold at one X Games, and that was the first time I did both. And 30 minutes before I got my gold in Step Up, I got a call that I closed on my house. My first property in the U.S. That whole weekend was just sick.”

When he’s not competing, McNeil has put in the laps touring with the Nitro Circus showcase and wowing stadium crowds with his stunts. “We do three shows a week with Nitro Circus. Most weeks, I’ve been getting two or three days at home, maybe.”

Time at home is precious now because McNeil became the father to a baby boy in 2021. He is already thinking about passing the torch to future generations. “My kid will definitely get a dirt bike! I was two when I started riding. He’s already pretty dialed on a strider bike.”

Want to hear the whole story from Monster Energy’s Jarryd McNeil himself? Visit the landing page to access Episode 41 of the UNLEASHED with The Dingo and Danny Podcast featuring Australian motocross trailblazer Jarryd McNeil.