Monster Energy is proud to welcome American singer and songwriter JXDN, legal name Jaden Isaiah Hossler, from Los Angeles, California, on Episode 47 of the sports and pop culture podcast UNLEASHED with The Dingo and Danny. 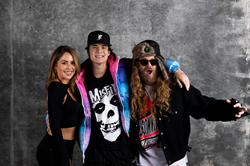 Last year has been the craziest year of my life! I did 110 shows. I traveled to almost every continent in the world. I went to South America, which changed my life forever.

Get the story behind one of today’s fastest-rising music artists! Monster Energy is proud to welcome American singer and songwriter JXDN, legal name Jaden Isaiah Hossler, from Los Angeles, California, on Episode 47 of the sports and pop culture podcast UNLEASHED with The Dingo and Danny.

The episode was initially broadcast live from Monster Energy headquarters in Corona, California, via the Twitch platform on December 12, 2022. As of today, fans can tune in to the official recording of Episode 47 of UNLEASHED on all major platforms, including Spotify, iTunes, and YouTube.

In the episode, the 21-year-old self-made music star provides an insight into his personal motivation that made him an internationally known music star before the age of 20. “I always knew I was going to be something, man. I just didn’t know what I was going to be. I had crazy aspirations. At one point I thought I was going to play in the NBA, but obviously, that didn’t happen,” said JXDN on UNLEASHED.

Born and raised in Texas, JXDN found his own musical voice as a teenager after relocating to Tennessee. Using digital tools and social platforms to build an audience, the multi-talent cultivated a following and soon went viral with the 2020 release of his debut single “Comatose.” In 2021, the upcoming artist was booked as the opening act on Machine Gun Kelly’s “Tickets to My Downfall.” Today, JXDN commands 9.4 million followers on TikTok and 4.4 million followers on Instagram, and just released his latest hit “Sober.” Relocated to California, he said on UNLEASHED, “Now I’m in L.A. doing exactly what I thought my dreams were going to be, so it’s pretty wild!”

JXDN was born in Grapevine, Texas, as “a super big Texas boy until I moved to Tennessee at age 14.” He names two formative periods in his life, both equally important. “If someone from Tennessee asks where I’m from, I say Tennessee. But if someone from Texas asks, I say, Yo I’m from Texas!”

Raised in a family of pastors, JXDN developed a sense for music early on. As a teenager, the young musician found success when he uploaded videos with his own songs to social media platforms. After building buzz and momentum, he decided to jump ship when social media platforms became to overrun and focus on his music.

The big change happened in 2020 with the release of JXDN’s 2020 rock song “Comatose.” After rock icon Travis Barker’s son Landon heard the track, Barker called JXDN’s management team: “That changed everything!” From there, Barker took the young star under his wing and signed JXDN to his record label.

Asked about what allowed him to rise from unknown beginnings to international star, JXDN said, “Failing and not letting that be the end of it.” Speaking more on the issue, he said, “I always tell people, any time the worst sh*t in my life has ever happened, the best thing that’s ever happened in my life comes right after. If you don’t fail, you’re never going to win!”

But JXDN is only getting started. “Last year has been the craziest year of my life! I did 110 shows. I traveled to almost every continent in the world. I went to South America, which changed my life forever.”

What’s next for JXDN? There’s a new album in the works that represents his evolution as a musician and songwriter, and JXDN reveals on UNLEASHED: “The range of the music on this album is so crazy. There’s no genre you could really put the whole project in. It’s all very branched out, and I’m really excited about it!”

Want to get all the keys to success? Hit that play button! Visit the landing page to access Episode 47 of the UNLEASHED with The Dingo and Danny Podcast featuring music sensation JXDN.

Episodes of UNLEASHED are filmed on a special set inside Studio M at Monster Energy headquarters in Corona, California. The podcast is hosted by the dynamic duo of Australian action sports personality Luke “The Dingo” Trembath and professional snowboarder Danny Kass. Known for their deep roots in action sports culture, the two starred in the beloved cult TV show ‘The Adventures of Danny and The Dingo’ on Fuel TV for five action-packed seasons in the early 2010s. Both hosts have walked the walk as pro snowboarders and possess the interview skills to find common ground with guests from any background – sports and pop culture. Always look out for new episodes dropping bi-weekly on Mondays.