Monster Energy is proud to announce the release of Episode 4 of the alternative sports podcast Unleashed with The Dingo and Danny. This latest one-hour installment features freeski pioneer Tom Wallisch, famous for his viral video edits and as a live TV commentator at X Games competitions. 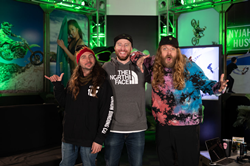 "I think the reason why I won all these riders’ polls or fan favorite things in the past was that I didn’t come up in skiing through contests. I wasn’t the kid that grew up out West in a program and privileged. My story was relatable to the ski fans out there." - Tom Wallisch

Monster Energy is proud to announce the release of Episode 4 of the alternative sports podcast Unleashed with The Dingo and Danny. This latest one-hour installment features freeski pioneer Tom Wallisch, famous for his viral video edits and as a live TV commentator at X Games competitions. The episode is now streaming on all major platforms, including Spotify, iTunes and YouTube.

Listen to the 33-year-old pro freeskier share the inside story of growing up outside the media spotlight in Pittsburgh, Pennsylvania, and rise to being known as one of the sport’s most famous athletes. Wallisch became a household name with his viral hit videos – heavy on street tricks down handrails and urban obstacles – and earned Freeskier Magazine’s ‘Skier of the Year’ Award in 2010 and 2012.

“I think the reason why I won all these riders’ polls or fan favorite things in the past was that I didn’t come up in skiing through contests. I wasn’t the kid that grew up out West in a program and privileged. I came from the East coast, grew up making videos. My story was relatable to the ski fans out there,” said Wallisch in the Unleashed podcast.

Fans can now visit the dedicated landing page to experience Episode 4 of the Unleashed with The Dingo and Danny Podcast. Listen to the X Games gold medalist talk all things snow sports with the two podcast hosts, Australian action sports personality Luke “The Dingo” Trembath and professional snowboarder Danny Kass in the one-hour episode.

Known and revered as one of the most creative freeskiers, Wallisch first barged on the scene in 2007 with his video entry in the Level 1 Superunknown video contest. At a time when competitive skiers had to earn their pro status on the competition circuit, Wallisch pioneered a new way: Filming his own freeski videos on urban terrain, published on platforms such as YouTube where they garnered millions of views.

That’s when Wallisch realized: “You can actually showcase your skiing other than a contest or a ski film as a yearly release. You can just put out a video on the internet and showcase it that way to kids. That’s just what I’ve always loved, the video making.”

Want to hear the full story? Visit the dedicated landing page for the new episode of the Unleashed with The Dingo and Danny Podcast featuring freeski icon Tom Wallisch.

Filmed on a special set inside Studio M at Monster Energy headquarters in Corona, California, the podcast is hosted by the dynamic duo of snowboard icon Danny Kass and Monster Energy brand personality The Dingo. Known for their deep roots in action sports culture, the two starred in the beloved cult TV show ‘The Adventures of Danny and The Dingo’ on Fuel TV for five action-packed seasons in the early 2010s. Both hosts have walked the walk as pro snowboarders and possess the interview skills to find common ground with any guest.

Speaking of common ground, former snowboard pros Danny and Dingo have plenty to share with Wallisch. On a trip down memory lane, the fourth guest on the Unleashed podcast details his early motivation for becoming a freeskier when the sport was still young: “I didn’t know that skiers were doing all this freestyle stuff. Once I saw it, I knew that’s what I wanna do!”

Aside from his online video fame, Wallisch also dominated the competitive scene in 2012 by taking Slopestyle gold at X Games Aspen, winning the overall Dew Cup and claimed the 2012 Men’s Slopestyle World Champion title. While videos like 2013’s highly acclaimed ‘The Wallisch Project’ remained his focus, the Pittsburgh-native turned Park City-resident also found the time to set an official world record: In 2016, he went into the Guinness Book of Records with a 424-foot rail grind. He also founded his own ski film production outfit called Good Company.

For the past years, Wallisch has been drawing on his rich freeski experience by working on the media side as a live commentator in ESPN’s Winter X Games competitions. “I just like to keep being involved after so many years with X Games. It's THE event,” said Wallisch on the podcast. Speaking on this year’s edition of X Games Aspen, the first after months of pandemic shutdowns, he said: “We haven't had any events in skiing. So, it was great to see all the boys and girls go out there and throw down for a change.”

But better hear the entire episode with Wallisch for yourself! Fans can now visit the show’s landing page to experience the first three episodes of the Unleashed with The Dingo and Danny Podcast filmed inside Studio M at Monster Energy headquarters in Corona, California. New episodes dropping bi-weekly on Mondays.

How about a sneak peek of the next episode of Unleashed with The Dingo and Danny? The podcast will welcome the fifth guest on Monday, May 3 and it’s going to be huge! That’s because the special guest is no other than power lifter and viral video sensation Jake “Big Boy” Johns. Prepare for a no-holds-barred conversation as Danny and the Dingo sit down with the 335-pound athlete known for his skateboarding stunts and feats of insane human strength. Heavy!

The Unleashed with The Dingo and Danny Podcast is here to celebrate the personalities behind the Monster Energy lifestyle. With each episode dedicated to a unique guest or topic, listeners learn about living on the edge and advancing the state of the art in the world of high-energy sports from individuals at the top of their game. More than a drink, Monster Energy is a way of life lived by athletes, sports, bands, believers and fans – and the podcast is an extension of this unique DNA.