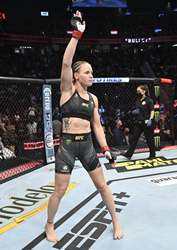 “It feels amazing. If you don’t believe in martial arts, you are wrong because martial arts is everything." - Valentina Shevchenko

And still the champion! Monster Energy congratulates Valentina “Bullet” Shevchenko on defending her UFC Women’s Flyweight World Championship title against Lauren Murphy at UFC 266 in Las Vegas, Nevada, on Saturday night. In the co-main event fight inside T-Mobile Arena, the 33-year-old mixed martial arts expert from Bishkek, Kyrgyzstan, shut down her opponent via TKO in the fourth round to defend her 125-pound title for the sixth time.

Monster Energy’s Shevchenko (22-3) stepped into the fight as the favorite after successfully warding off Jessica Andrade via TKO in the title fight at UFC 261 in April 2021. But she faced a formidable adversary in 38-year-old Lauren Murphy (15-5), who came to Las Vegas on a five-fight winning streak.

Right out the gate, Shevchenko set the pace in the fight and started dismantling Murphy with precise jabs and leg kicks. The champion’s fast combos and right hooks already left her opponent visibly bruised before the end of Round 1, which she concluded with a textbook takedown and ground control.

Over the next two rounds, Shevchenko demonstrated the full strength of her arsenal by dominating on the feet as well as the ground. Murphy held up under the pressure but saw almost every strike countered with heavy hits by the champion, who used every opening with surgical precision.

The fight’s final moments unfolded when Shevchenko stunned Murphy with a hard body kick and kick to the face. She then wobbled Murphy with a powerful right hook and proceeded to unleash heavy elbows and hammer fists from the top position on her defenseless opponent. Game over! At 4:00 minutes of Round 4, referee Keith Peterson pronounced Shevchenko the winner by TKO in a worthy championship fight.

“It feels amazing. If you don’t believe in martial arts, you are wrong because martial arts is everything!” said Shevchenko upon defending her UFC Women’s Flyweight World Championship at UFC 266 on Saturday night. “When you feel this is a moment to get your finish, I went all the way until the end. When I saw the position, I just started to elbow, elbow, elbow and I knew the finish was coming soon!”

Saturday’s victory marks the sixth successful title defense for Shevchenko and brings her victory streak to eight wins in a row. The Kyrgyzstani-Peruvian mixed martial artists first claimed the UFC Women’s Flyweight title at UFC 231 against Joanna Jedrzejczyk in December 2018. She has never lost a fight at flyweight.

What’s next for Shevchenko? Without naming any specific opponents for her next bout, she said: “I am ready for anyone, no matter weight class or anything. I am here, I am the champion!” Stay tuned as Shevchenko continues one of the most dominant runs in UFC history.