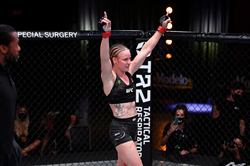 I’m very glad it was five rounds, because I had a long layoff. I needed to feel the spirit in the Octagon, the spirit of the fight to know I’m back healthy, 100 percent." - Shevchenko

UFC 255: Figueiredo vs. Perez was contested as a closed-to-the-public event in the safe environment of the UFC Apex facility in Las Vegas and broadcast live on ESPN+ pay-per-view. The event happened amid enhanced safety protocols to curb the spread of coronavirus (COVID-19), including stringent pre-fight quarantine and extensive testing for fighters and personnel.

Shevchenko (20-3) stepped into the Octagon as the reigning UFC Women’s Flyweight Champion. She first earned the title in a fight against Joanna Jędrzejczyk at UFC 231 in December 2018. In February 2020, Shevchenko defended her belt at UFC 247 with a knockout victory against Katlyn Chookagian. But recently recovered from MCL surgery on her knee, she was in for a challenge: Saturday night’s opponent, 32-year-old Brazilian jiu-jitsu specialist Jennifer Maia came to Las Vegas as a strong contender after submitting Joanne Calderwood in Round 1 at UFC Fight Night 173 in August.

Both fighters launched into the title fight swinging, but it was the champion who landed the first significant strikes. Drawing on her superior grappling, Shevchenko secured a body lock to take Maia to the mat and dominate from the top. But she was in for a surprise when Maia turned up the heat in Round 2, managing to take down Shevchenko to become only the second flyweight in UFC history to win a round over the champion.

From there, Shevchenko immediately reinstated her dominance, scoring a total of five successful takedowns throughout the fight and using her superior range to land heavy left cross strikes, spinning elbows and leg kicks. According to official stats, Shevchenko outperformed her opponent in total strikes 231 over 101, leaving Maia’s face visibly bloodied by the final bell at the end of Round 5. When all was said and done, all three judges scored the fight a dominant win for the champion at 49-46, a unanimous decision victory.

“I’m very glad it was five rounds, because I had a long layoff. I needed to feel the spirit in the Octagon, the spirit of the fight to know I’m back healthy, 100 percent. Nothing is bothering me. I’m glad it was Jennifer Maia, a tough opponent, first, and then it went the distance, so I know for the next one I’m 100 percent healthy,” said Shevchenko upon defending her UFC Women’s Flyweight Championship at UFC 255.

Saturday’s victory earned Shevchenko a $50,000 performance-of-the-night bonus and brings her career record to 20 wins over three losses. She has now defended her 125-pound title for the fourth consecutive time and extended her winning streak to six. The Kyrgyzstani-Peruvian professional mixed martial artist and former Muay Thai fighter is the most recent addition to Monster Energy’s elite UFC team. She is the younger sister of fellow UFC fighter Antonina Shevchenko, who stopped Ariane Lipski by second-round TKO victory at UFC 255 earlier on Saturday night; the first time that two sisters competed (and won) on the same UFC card.

What’s next for Shevchenko? At the post-fight news conference on Saturday night, the reigning champion said she wants to face the next opponent, possibly former strawweight champion Jessica Andrade, sooner than later. “I don’t choose my opponents. Whoever will be in front of me is who I’m going to face. For me, it doesn’t make any difference – Andrade or someone else,” said Valentina Shevchenko, adding: “I’m ready to go back to the octagon as soon as I feel good and I feel good.”