Monster Energy is proud to announce the worldwide premiere of the new all-female “Snowcats” video, starring some of the world’s best snowboard athletes. 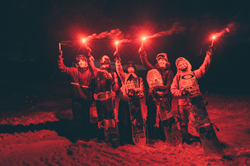 The high-energy edit was filmed on a special obstacle course created by acclaimed terrain park designer Charles Beckinsale. Course highlights include a long kicker gap for big airs, various technical handrails, as well as a massive quarter pipe/wave obstacle connected to an upward rail. Paired with some of the most creative freestyle snowboarders on the planet in a free-flowing expression session, it’s the perfect backdrop for a memorable snowboard video.

Expect never-been-done technical tricks and transfers, especially on the rail to quarter pipe obstacle. Also look forward to the kind of stylish aerials that riders rarely showcase in the ‘spin to win’ world of competitions, including unique switch variations from ‘Rookie of the Year’ Sadowski-Synnott. Also watch 19-time X Games medalist Anderson float down the track in signature effortless style while throwing down heavy rail tricks and contorted airs.

See Japanese snowboard wunderkind Murase unveil brand-new aerials, while upcoming German ripper Morgan sends it big over the gap and takes precise switch moves to the next level. Speaking of ‘next level’, see decorated street snowboarder Perkins land handrail tricks in a league of her own, while throwing in classic handplants and stylish rodeo flips for good measure. And for a special treat, get ready to see Olympic gold medalist Kim outside of her natural Superpipe terrain, putting down slopestyle airs and working the rails with technical tricks.

“Snowcats” is set to the tunes of “Had Ten Dollaz” and “Grilled Cheese” by indie rockers Cherry Glazer and packs tremendous re-watch value. Especially since the action was captured on video by pro snowboard filmers Marcus Skin, Jeremy Thornberg, and Spencer Whiting aka “Gimbal God”. The video shoot was also documented in still photography by Josh Bishop and Dasha Nosova.

But better see for yourself! Catch all the action in the brand-new “Snowcats” video clip, live now on Monster Energy’s YouTube channel.

Aside from starring in “Snowcats”, Monster Energy’s women snowboarders put down an epic 2020/21 season: Anderson expanded her record as the most decorated woman in snow sports by clinching gold in both Slopestyle and Big Air at X Games Aspen 2021 and becoming the first female to compete in Snowboard Knuckle Huck. Sadowski-Synnott defended her FIS World Championship Title in Snowboard Slopestyle and won the first stop of the Natural Selection competition tour in Alaska.

Kim returned from her freshman year at Princeton to dominate every single Superpipe event she entered, including her sixth X Games gold. Murase took Slopestyle silver in the 2021 FIS Snowboard World Cup finals. Perkins received ‘Rider of the Year’ honors at the 2021 Slush Magazine Snowboard Awards and Morgan came out of pandemic lockdown with a strong performance at Audi Nines 2021.