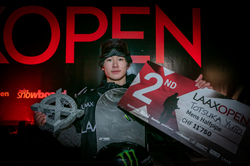 I think the halfpipe in Laax is the best halfpipe in the world, because it’s smooth and so big - Yuto Totsuka

Monster Energy congratulates team rider Yuto Totsuka on taking second place in Men’s Snowboard Halfpipe at the 2020 Laax Open competition on Crap Sogn Gion Mountain in Switzerland on Saturday. Competing against the world elite of superpipe snowboarding, the 18-year-old rookie from Kanagawa, Japan, kicked off his 2020 season with yet another podium finish.

Considered the most important snowboard event in the European mountains, Laax Open attracts the world’s best female and male snowboarders every year for slopestyle and halfpipe competitions. The level of riding is always state of the art, as riders unveil their latest trick creations for the new season in a five-day event accompanied by parties and musical performances.

With $100,000 in prize money on the line, the Laax Open halfpipe competition unfolded on hallowed ground. The Laax Superpipe is revered as the world’s largest snow halfpipe. Measuring over 22.5 feet in height and 650 feet in length, the halfpipe provides the perfect backdrop for the season’s most spectacular aerial show.

In Saturday night’s Snowboard Halfpipe final, the high-energy crowd in Laax cheered on an international field of riders from Australia, Switzerland, Japan, and the United States. The night session under floodlights saw a field of twelve finalists gunning for the top spots. But one rivalry dominated: Current X Games snowboard halfpipe gold medalist Scotty James from Australia versus Monster Energy’s Totsuka from Japan.

The two snowboarding prodigies share a long competitive history, with James emerging as the winner in his last eight starts, including World Cup, X Games and US Open competitions.

“I think the halfpipe in Laax is the best halfpipe in the world, because it’s smooth and so big. I definitely want to beat Scotty James,” said Totsuka before the competition.

Then Scotty James fired back by unveiling his latest trick, a double cork 1440 melon, to take the lead at 95.75 points. Now the pressure was on Totsuka to clinch the win on his second and final run. The challenger opened strong by blasting a 1440 double cork mute as his first trick and following up with back-to-back 1080s on both walls. But when he lost his momentum after landing a technical switch 1260 double cork tuck knee grab, Totsuka had to settle for second place.

The end? Not so fast. Look forward to Totsuka and Scotty James revisiting their rivalry at the world’s greatest winter sports spectacle less than one week from now.

Also making a huge impression on the judges in Laax tonight, Monster Energy athlete and Swiss snowboard icon Iouri Podladtchikov returned to competition after dealing with heavy injuries during the last season. On his first run, the 2014 Olympic snowboard halfpipe gold medalist stoked the crowd with tricks like frontside double cork 1080, frontside 900 mute grab and a fully extended alley-oop 540 nosegrab for 76.50 points and a solid fifth-place finish.