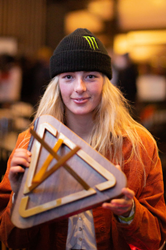 Three weeks ago, I didn’t even know I was going to be here. I never expected to be competing in Natural Selection and then to come away with the win definitely means so much to me. I was just honored to ride with my favorite snowboarders." Zoi Sadowski-Synnott

Monster Energy congratulates upcoming New Zealand snowboarder Zoi Sadowski-Synnott on her first-place finish in the Natural Selection Tour competition at Jackson Hole Mountain Resort (JHMR) on Tuesday. On day two of the invite-only competition featuring some of the world’s best all-mountain freestyle snowboarders, the 19-year-old from Wanaka, New Zealand, rose to the top in a field of four finalists on Moran Face mountain.

Based on a concept by professional snowboarder Travis Rice, the Natural Selection Tour is dedicated to showcasing the progression of freestyle snowboarding in natural environments. The event in Wyoming featured 16 men and eight women in a knockout format of head-to-head competitions, with winners advancing to the next round. It kicked off the three-stop tour that will see the elite of freestyle snowboarding taking on natural and naturally enhanced terrain, replete with layers of fresh powder snow and obstacles such as trees and cliffs.

Each stop is held over a seven-day window to ensure peak course conditions, with freestyle obstacles constructed and embedded into the mountainside by the world’s best designers. The next stop will take place at Baldface Lodge, British Columbia, Canada, from February 28 to March 7. The tour will conclude with the crowning of a men’s and women’s champion at Tordrillo Mountain Lodge, Alaska, from March 20-27.

Monster Energy’s Sadowski-Synnott joined the Natural Selection Tour as the youngest competitor. She earned the invitation as a Wild Card Rider, voted in by an online poll held among fans for the best one-minute snowboard video among eleven entries. Fresh off claiming Slopestyle silver and Big Air bronze medals at X Games Aspen 2021 the week before the contest, Sadowski-Synnott took on the natural downhill course, featuring over 50 natural jumps spread across 16 acres of big-mountain terrain, with confidence.

On the first day of competition, Sadowski-Synnott was pitted against big mountain film icon Robin Van Gyn. Despite the fact that the Natural Selection Tour marked Sadowski-Synnott’s debut in a backcountry competition, the rookie pro attacked the downhill run at high speed, sending two back-to-back gap airs across the distance, followed by a backflip and Indy air off the small popper. On her next run, she added a huge frontside 360 stalefish, a transfer over the butter pad, and huge backflip to advance to the next round.

On Day Two, Sadowski-Synnott battled one of the most seasoned backcountry riders on the circuit, Hana Beaman from Bellingham, Washington, and advanced to the final after visibly finding her groove, having spent a week of riding fresh powder snow.

In the final battle on Tuesday, Sadowski-Synnott went head-to-head against the three-time consecutive winner of the Freeride World Tour, Marion Haerty from France. Despite tough snow conditions that proved challenging for many competitors, Sadowski-Synnott delivered the best run of the day: On the tree-lined downhill run, she launched off a cliff gap with a massive contorted tailgrab air, followed by a huge backflip Indy, also known as a Wildcat, down the next drop. Carving the snow-covered slopes with fluid style, she delivered a 360 on flat, Japan air over the natural kicker, Indy pop down a gap and a backside 360 Indy grab over the jump obstacle for the win.

“Three weeks ago, I didn’t even know I was going to be here. I never expected to be competing in Natural Selection and then to come away with the win definitely means so much to me. I was just honored to ride with my favorite snowboarders. This is how snowboarding really is and there’s finally an event that shows that,” said Sadowski-Synnott upon winning the women’s event in the inaugural Natural Selection Tour.

At only 19 years of age, Sadowski-Synnott is hailed as one of the pacesetters of progression in freestyle snowboarding. She was named ‘Rookie of the Year’ in the 2020 Snowboarder Magazine Awards and made history by winning Slopestyle bronze at the 2018 PyeongChang Olympics, ending New Zealand’s 26-year medal drought and becoming a national hero. She currently owns five X Games medals (2 gold, 2 silver, 1 bronze) and started her 2021 season with a Big Air victory at the FIS World Cup in Kreischberg, Austria.