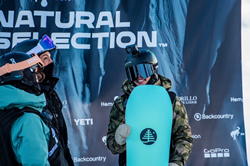 The Natural Selection Tour is a new competition format created by professional snowboarder Travis Rice. The main focus lies with showcasing the progression of freestyle snowboarding in natural environments. In an invite-only competition format, the top riders of freestyle snowboarding battle head-to-head on natural and naturally enhanced terrain, replete with layers of fresh powder snow and obstacles such as trees and cliffs.

The event in Alaska wrapped up the three-stop Natural Selection tour that started in Jackson Hole, Wyoming, in February followed by a contest in Baldface Valhalla, British Columbia. At every stop, riders were challenged by the perfect symbiosis between big mountain riding and freestyle park skills. Aside from natural hills and gaps, the world’s best course designers enhanced the downhill runs with freestyle obstacles constructed and embedded into the mountainside.

Monster Energy’s Sadowski-Synnott joined the inaugural Natural Selection Tour as the youngest competitor and instantly turned heads by taking the win at the Jackson Hole event. After missing the podium at the Canada stop, the current FIS Women’s Slopestyle World Champion came to Alaska looking to find her line on natural terrain.

The infamous Montrachet Spines of the Tordrillo mountain range provided the backdrop for the tour’s final battle. In the semifinal, Sadowski-Synnott was up against Canadian Robin Van Gyn, winner of the Baldface Valhalla stop, and Hana Beaman from the U.S. for a spot in the final. Drawing on her extensive repertoire of freestyle tricks, Sadowski-Synnott earned her way by working the downhill course with a massive Wildcat and a huge frontside 360 air off the ridge for a score of 92.00 points, the highest of the day.

In the head-to-head final session under perfect blue skies, Sadowski-Synnott faced off against backcountry snowboarding veteran Robin Van Gyn over three runs, winner decided by the single highest-scoring run. Straight out the gate, Sadowski-Synnott took the lead by posting high-speed carves down the rugged mountain face, interspersed by gap airs including tail, stalefish and Weddle grabs for 60.00 points.

On her two remaining runs, Sadowski-Synnott upped the ante by adding a backflip, frontside nosebone and backside 360 Indy air to her line, earning a high score of 64.00 points. But ultimately, 35-year-old Robin Van Gyn edged ahead by landing a 30-feet cliff drop to boost her run score to 76.00 points for the tour title, leaving Sadowski-Synnott in a strong second-place position.

Sadowski-Synnott is having the best season of her young career right now. In March, the 20-year-old defended her World Championship title in Women’s Snowboard Slopestyle and claimed Big Air silver at the FIS Snowboard World Championships in Aspen. Her year started with a Big Air victory at the FIS World Cup in Kreischberg, Austria, followed by Slopestyle silver and Big Air bronze at X Games Aspen 2021. The previous year, her breakout season won ‘Rookie of the Year’ honors in the 2020 Snowboarder Magazine Awards. At the 2018 PyeongChang Olympics, Sadowski-Synnott made history by winning Slopestyle bronze, ending New Zealand’s 26-year medal drought.