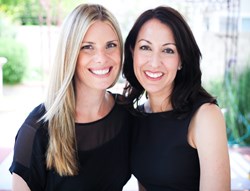 The highly credentialed freelance lawyers in Montage’s network have changed the way ‘contract lawyers’ are viewed, and have helped law firms thrive by providing them an alternative way to staff their cases at reduced costs.

Enterprising Women Magazine has announced the winners of the 2014 Enterprising Women of the Year Awards, and Montage Legal Group's co-owners/founders, Erin Giglia and Laurie Rowen, have been selected as winners in the $1-2 million revenue category. They were chosen out of hundreds of nominees to receive this honor, and will appear in an upcoming issue of Enterprising Women Magazine. They will be also be recognized during a two-day event held in March at the Ritz Carlton Sarasota in Florida.

The annual Enterprising Women of the Year Awards, which recognizes female entrepreneurs in North America and beyond, is widely considered one of the most prestigious recognition programs for women business owners. To win, nominees must demonstrate that they have fast-growth businesses, mentor or actively support other women and girls involved in entrepreneurship, and stand out as leaders in their communities. "The Enterprising Women of the Year Awards Celebration continues to grow each year, attracting more nominations from outstanding women entrepreneurs around the world," said Monica Smiley, publisher and CEO of Enterprising Women Magazine.

Montage Legal Group’s network of freelance lawyers consists of former associates and partners who opted out of prestigious law firms, and now practice law on their own terms. Montage’s freelance attorneys assist small to mid-sized law firms with substantive legal projects on an hourly basis, providing a cost-effective way for firms to manage case overflow and grow specialty practices. Montage has seen tremendous growth since it started in 2010, growing from 3 freelance attorneys to over 80 freelancers serving law firms nationwide. “The highly credentialed freelance lawyers in Montage’s network have changed the way ‘contract lawyers’ are viewed, and have helped law firms thrive by providing them an alternative way to staff their cases at reduced costs,” says Erin Giglia.

Montage’s owners have been recognized for their dedication to advancing women in the law and their contributions to the community, including OC Metro Magazine’s 2011’s “Top 40 under 40,” feature stories in the ABA Journal, NAWBO-OC’s 2012 Entrepreneur to Watch, and USD School of Law’s 2012 Rising Star Recent Alumni Award. Montage’s owners give back to their community by serving on the Advisory Board of WHW (Women Helping Women/Men2Work) and NAWBO-OC.