North American Title Co. has named Michael A. Montalvo president of its eastern region. He will oversee operations for the more than 50 branch offices in many of the region’s premier real estate markets. 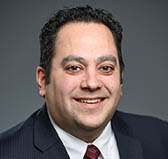 He is well-suited to lead our extensive operations in the eastern region and to execute strategies that drive customer delight!

CONCORD, CALIFORNIA – Feb. 11, 2019 – North American Title Co. (NATC) has named Michael A. Montalvo president of its eastern region, following the sale of the company to States Title, Inc. in January. He will oversee operations for the more than 50 branch offices in many of the region’s premier real estate markets.

“With nearly three decades of experience in the title industry, Mike brings a wealth of operational expertise and a proven track record of delivering robust results,” said NATC President Dia Demmon. “His rise through the ranks at North American Title over the past few years is a testament to his considerable skill, as well as his visionary and approachable management style. He is well-suited to lead our extensive operations in the eastern region and to execute strategies that drive customer delight!”

Montalvo most recently served as central region president, managing NATC’s operations in Colorado, Illinois, Minnesota and Texas. Prior to that, he was Illinois division president. His career in the title industry began in 1991 as a scheduling clerk with the Professional National Title Network. During his 14 years there, he gained experience in title and escrow, eventually managing several different departments and finishing his time there in sales and marketing. He then worked for nearly six years as vice president, operations manager Chicago residential for a major title company before joining NATC.

“These are exciting times at North American Title as we work with States Title to carve a new pathway for the industry as a whole,” Montalvo said. “The opportunity to be on the forefront of revolutionary changes in the industry and to work with an amazing staff of dedicated associates to implement more streamlined methods for serving our customers is a once-in-a-lifetime opportunity for which I am honored and grateful.”

About North American Title
With close to 1,000 associates and a network of branches from coast to coast, North American Title Company (NATC) is among the largest real estate settlement service providers in the United States. Through its relationship with an expanding affiliate network, NATC provides or is able to coordinate real estate settlement services in all 50 states. With more than 100 offices across the country, NATC offers a depth and breadth of local expertise and knowledge in many of the premier real estate markets. NATC’s parent company is States Title Holding Inc., headquartered in San Francisco, California. Founded by Max Simkoff and backed by a significant financial investment from Lennar and leading venture capitalists in Silicon Valley, States Title uses cutting-edge technology to deliver a modern title and escrow platform.