Work has begun to replace controversial statues and regain pride in our history. 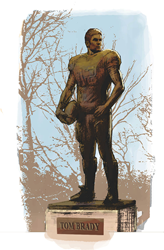 “This moment is an opportunity to enhance and do justice to these places of commemoration and preserve our heritage with a better vision of ourselves.”

Amidst the widespread rapid re-evaluation of the suitability of statues representing controversial historical figures, one organization is taking steps towards refilling the plinths and helping to shape a brighter representation of our modern history.

Following the events of the past few weeks which have prompted a major turning of the tide in political perception of public statues, sharp focus has been drawn upon the appropriateness of certain memorials with large-scale protests and vigilante statue teardowns leading to quick responsive action from authorities with the removal of some high-profile sculptures.

Support for the withdrawal of these controversial statues has been widespread and while the arguments for removing memorials to representatives of the slave trade are valid, with many more statue removals likely to follow, many people have been asking: what should be done with the empty plinths now?

One organization is stepping forward to proffer a positive solution and lay the path towards building an improved landscape of statues across the country that better represent contemporary achievements and reflects the full spectrum of modern experiences.

Monument Keepers say that now is the time to realign the vacant pedestals to mark modern heroes and commemorate contemporary history makers.

Robert Cope, Founder of the Monument Keepers organization said “Those plinths are public platforms of commemoration. The old statues are being removed for the offence they cause but we should not leave empty pedestals. This moment is an opportunity to enhance and do justice to these places of commemoration and preserve our heritage with a better vision of ourselves.”

Cope’s personal motivation for this project stems from his grandmother’s love of national monuments and the passion for heritage preservation work passed onto him. He is also funding his efforts with the inheritance his grandmother left him so her passion can live on and benefit others.

Monument Keepers is focused on the commission, production and dissemination of forward looking monuments and has assembled a team of artistic partners to realize the new bronze sculptures of modern historical heroes that represent and befit contemporary standards.

Negotiations have already begun with 12 city governments in three states starting the process towards installation of the new statues with provisional plans and schematics already drawn up for proposed monuments and luminaries to be commemorated including famed Patriots Quarterback Tom Brady and former New York Mayor Rudy Giuliani who is recognized for his leadership in the wake of 9/11.

Born out of a passion for American history that can be traced back several generations, Monument Keepers was founded by Conservative christian Robert Cope to honor his grandmother’s love of monuments. Over the course of her lifetime she visited 93 of America’s 128 National Monuments. This lifelong journey took her to 27 States and instilled in her a deep appreciation for heritage preservation work. Partnering with a slate of impressive sculptors and artists Monument Keepers is focused on the commission, production and dissemination of forward looking monuments. These are statues and busts that represent American bravery and leadership that all citizens can unite around. For every statue that is vilified and destroyed Monument Keepers aims to mount new idols whose heroism is unquestionable and therefore eternal.