Moo & Oink Corporate Chef Dwight Evans II has been named “Chef of the Year” by the American Culinary Federation (ACF) Chicago Chefs of Cuisine. Chef Evans has the distinction of being the first African American chef to be honored with the coveted award. 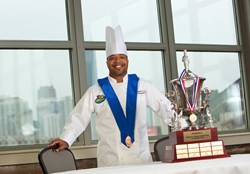 We are so pleased for Chef Evans on his being named ‘Chef of the Year’,” said Dave Van Kampen, Chief Herding Officer of Moo & Oink. “He’s a bona fide star in the culinary industry.

Chef Evans has the distinction of being the first African American chef to be honored with the coveted award.

“It is a huge honor to be recognized by my colleagues,” Chef Evans said. “I was truly stunned. I couldn’t even sleep that night.”

Chef Evans was judged from his creative talents as a chef, his many positive contributions to the culinary arts profession and for his tireless work promoting, educating and mentoring young culinarians.

He has been corporate chef for Moo & Oink since July, 2012. He is able to be an integral part of the development of new recipes using Moo & Oink products. As Moo & Oink’s chef and spokesperson, he has made several appearances in cooking segments on network and national TV.

“We are so pleased for Chef Evans on his being named ‘Chef of the Year’,” said Dave Van Kampen, Chief Herding Officer of Moo & Oink. “He’s a bona fide star in the culinary industry, and we are so proud to have him on our team.”

Chef Evans attended Ball State University, Muncie, IN, before transferring to Johnson & Wales University, Charleston, S.C. In 2002, he graduated from École Supérieure de Cuisine Française in Paris. While there, he worked at Le Jules Verne, a Michelin two-star restaurant at the top of the Eiffel Tower.

In 2009, Ebony Magazine named Chef Evans one of America’s top African-American chefs. Currently, he is on the board of directors of the American Culinary Federation Chicago Chefs of Cuisine, Inc., serving in 2013 as first vice president. He is in line to assume the presidency of this prestigious organization.

Chef Evans has ambition as well as a big heart. He has participated in No Kid Left Hungry and Junior Cuisine. He is currently completing the pilot for his cooking show, “Fine Dining with Chef Evans,” and he is looking for a publisher for his book titled, “From the Ghetto to Gourmet…I Refuse to Lose.”

The book title is an accurate description of his life. He was a high school drop-out whose peers called him “Loser of the Year,” and he was headed down a dark path. In his early 20s, Chef Evans lost a number of family members to murder, and when his first cousin, Roy Washington, was murdered, young Dwight had an epiphany while mourning.

“Roy’s death saved my life,” Chef Evans said. “I got my GED and was able to go to culinary school. The title of my book is very honest; I did refuse to lose. I find it encouraging that the Loser of the Year has been named Chef of the Year. It feels very good.”

The Chicago Chefs of Cuisine was founded in 1925. During the early years, the association served as an employment and chef's reference office. Two years later, world renowned Master Chef Auguste Escoffier visited Chicago and was presented with an honorary membership.

The American Culinary Federation, Inc. is referred to as “The Authority on Cooking in America.” The professional organization for chefs and cooks was founded in 1929 in New York City by three chefs’ organizations: the Société Culinaire Philanthropique, the Vatel Club and the Chefs de Cuisine Association of America. It is an organization based on promoting the professional image of American chefs worldwide through education of culinarians at all levels.

The Chicago Chefs of Cuisine came under the ACF’s umbrella in 1929.

In 1976, ACF forever changed the culinary industry by elevating the position of the executive chef from service status to the professional category in the U.S. Department of Labor’s Dictionary of Official Titles. Since this change, the culinary industry and the organization have grown tremendously. Today, ACF is the largest professional chefs’ organization in North America with more than 20,000 members who belong to more than 200 chapters in four regions across the United States.

Moo & Oink provides an array of Chicago-style BBQ meats and grilling essentials including meaty rib tips, chitterlings, hot and mild links, sausages, breakfast links and patties, breaded chicken tenderloins and nuggets, and the best darn BBQ sauce known to man. Moo & Oink has a strong commitment to making great tasting and affordable food to mark any occasion. From a BBQ in the park or the backyard grill to a Sunday family dinner, Moo & Oink is real people food.

The legendary brand is owned and operated solely in Chicago and has been a staple in the Chicago community for more than 40 years. Products are now available in 300 stores in five states – Illinois, Indiana, Wisconsin, Michigan and Minnesota. In addition, Moo & Oink products can be shipped anywhere in the continental United States. For more information, call 773-523-8161 or visit: http://www.moo-oink.com. To order online, visit: http://www.tastechicagosbest.com.