63% of Government Workers Are Worried that Cyberattacks on Candidates, Political Parties, and Voting Infrastructure Will Impact The Integrity of the Upcoming U.S. Election 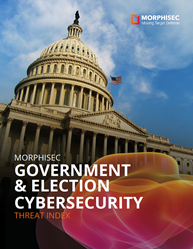 "Local municipalities are often underfunded, short-staffed and lack even the most basic cybersecurity protocols, meaning they’re readily vulnerable and will be in attackers crosshairs as we approach November 3."

63% of government workers say they are worried that cyberattacks on candidates, political parties, and voting infrastructure will impact the integrity of the upcoming U.S. election, according to the Government & Election Cybersecurity Threat Index released today by Morphisec, the leader in Advanced Threat Prevention. In addition, more than 3-in-4 government workers (77%) believe that states and local governments need more federal funding to protect voting infrastructure better.

With the U.S. presidential election just weeks away, the entire country is on high alert for cyberattacks, particularly those carried out by sophisticated nation-states or state-sponsored attackers determined to spread disinformation, disrupt national voting systems, or disable critical infrastructures. While it’s rare for voting equipment to be connected to the internet, government employees are concerned that both cyberattacks and the spread of information could undermine the election's integrity.

Furthermore, with COVID-19 creating the need for mail-in voting, there is the worry that attackers could utilize advanced malware attacks, such as the recently discovered Trickbot/Emotet variant, to undermine or disable mail-in ballot processing. That recent global campaign was successful in breaching France’s court system. The pandemic is also forcing 42% of government employees to continue working remotely, further complicating cybersecurity defenses and increasing attack surfaces during this critical period.

“Federal and especially local government employees are right to be worried about cyberattacks as we head towards election day,” said Andrew Homer, VP of Security Strategy at Morphisec. “Local municipalities are often underfunded, short-staffed and lack even the most basic cybersecurity protocols, meaning they’re readily vulnerable and will be in attackers crosshairs as we approach November 3. Furthermore, while it's encouraging to see many government workers — forced remote by COVID — using antivirus and VPNs, they remain targets for attacks that bypass traditional detection solutions. Proactive solutions, such as moving target defense, which is designed to automatically block and lock down evasive threats, is needed to guard against these sophisticated global threats.”

To assist in protecting the upcoming U.S. elections' integrity, Morphisec is currently offering its Morphisec Guard full endpoint security solution for free to state and local governments in the U.S. through the election. To find out more, sign up here.

Morphisec delivers an entirely new level of endpoint security for any business with its Moving Target Defense-powered Guard and Shield products. Moving Target Defense places defenders in a prevent-first posture against the most advanced threats to the enterprise, including APTs, zero-days, ransomware, evasive fileless attacks and web-borne exploits. Morphisec provides a crucial, small-footprint memory-defense layer that easily deploys into a company’s existing security infrastructure to form a simple, highly effective, cost-efficient prevention stack that is truly disruptive to today’s existing cybersecurity model.