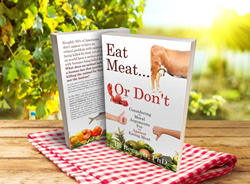 Eat Meat… Or Don’t: Considering the Moral Arguments For and Against Eating Meat.

"Don’t allow yourself to be bullied or bamboozled into a position by those who use sophistry to try to get you to buy into their views—whether they want you to eat no meat, less meat, or more meat."

According to a recent Gallup poll, only five percent of the population identifies as vegetarian or vegan—a number that has barely budged in the last 20 years. Relatively few people who include meat in their diet have given much thought to the ethics of indulging their carnivorous appetite. However, it’s a topic worthy of personal reflection for everyone, says Dr. Bo Bennett author of ‘Eat Meat… Or Don’t: Considering the Moral Arguments For and Against Eating Meat.’ Whether one chooses to eat meat or not, there are real impacts, “for animals, the environment, and ourselves.”

Readers looking for a vegetarian screed decrying the evils of hamburgers and proclaiming salvation through vegetarianism will need to look elsewhere. While sympathetic to many of the concerns of vegetarians, Bennett admits to happily eating meat “a couple of times per week.”

“Rather than pushing a specific ideological agenda, the book is ultimately about critical thinking,” says Bennett. “The ethics of eating meat provides an ideal topic and case study, as it’s something most people do all the time, without thinking much about it,” says Bennett. “Yet eating meat is actually a complex topic from a moral and ethical perspective.”

Dr. Bennett has taught moral psychology as an adjunct professor at Lasell College and has written several books dealing with moral issues. The book does not provide simple answers or easy-to-follow guidelines. Instead, the author invites readers to think and reason clearly and critically, and discover for themselves the role meat should have in their diet.

“Either behavior [eating or avoiding meat] can be morally consistent depending on your moral framework,” he explains. “Don’t allow yourself to be bullied or bamboozled into a position by those who use sophistry to try to get you to buy into their views—whether they want you to eat no meat, less meat, or more meat.”

Despite his apparent indifference on the issue, Dr. Bennett makes a strong case for considering the well-being of animals in moral evaluations, and he also generally encourages reducing meat consumption. “If reducing animal harm is something you value, then lowering one’s own meat consumption and helping others realize the virtues of eating less meat are both great places to start,” says Dr. Bennett. “I do hope that readers will want to reduce the amount of meat in their diet after reading my book. However, if I have just improved their ability to think more critically and rationally about the issue, then I have done my job.”

“Eat Meat… Or Don’t” is available in ebook, paperback, hardcover, and audiobook at all major online retailers, including Amazon.com, and select brick-and-mortar bookstores around the world.

About Dr. Bo Bennett
Dr. Bennett holds a PhD in social psychology, a master’s degree in general psychology, and a bachelor’s degree in marketing. He has published over a dozen books on the topics of logic, reason, argumentation, psychology, philosophy, religion, and critical thinking. He currently runs eBookIt.com, a service for self-published authors and small presses, that he started in 2010. You can find out more about him at BoBennett.com.

About eBookIt.com
Since 2010, eBookIt.com (based in Sudbury, Massachusetts) has helped thousands of authors and publishers get their books converted to ebook format, and distributed to all the major ebook retailers, including Amazon.com, Barnesandnoble.com, Apple iBookstore, Kobo, Ingram Digital, and Google eBookstore.