New name honors the community the hospital serves, and reflects the considerable investments that have brought technologically advanced Mount Sinai-level care to the residents of Upper Manhattan, Westchester, New Jersey, and beyond. 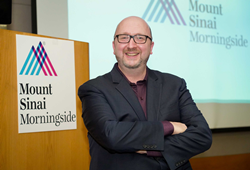 Mount Sinai St. Luke’s hospital will now operate under the name Mount Sinai Morningside, reinforcing the hospital’s integral role as part of the world-renowned Mount Sinai Health System and the primary provider of health care to the 148,000 residents of West Harlem, including Morningside Heights.

The new name was approved by Mount Sinai Health System’s Boards of Trustees, the New York State Department of Health, and the New York Secretary of State. The change becomes effective immediately.

“This new name not only reaffirms our 124-year legacy of serving the communities constituting West Harlem, including Morningside Heights, but also our commitment to delivering technologically advanced Mount Sinai-level care to our patients, who are increasingly coming to us from all five boroughs, Westchester, New Jersey, and even internationally,” said Arthur A. Gianelli, President of Mount Sinai Morningside and Chief Transformation Officer for the Mount Sinai Health System. “We have undergone a transformation that positions Mount Sinai Morningside as an integral part of the Mount Sinai Health System. Our patients now have convenient access to a vast network of world-renowned physicians and cutting-edge medical care.”

“Mount Sinai Morningside has grown into a top-tier health care facility that serves as this region’s gateway to the Mount Sinai Health System, expanding access for Upper Manhattan, New Jersey, Yonkers, Westchester, and surrounding areas,” said Kenneth L. Davis, MD, President and CEO of the Mount Sinai Health System. “The hospital’s rebranding and transformation efforts reaffirm our commitment to setting standards for excellence and innovation in health care through technically advanced and groundbreaking procedures, equipment, and research that result in better outcomes for our patients.”

Mount Sinai Morningside’s transformation is the result of hundreds of millions of dollars in investments in clinical services, facilities, equipment, and information technology. Physicians with international reputations have been recruited, and a number of international clinical trials have been launched at Mount Sinai Morningside. Centers of excellence have been established in cardiology and cardiac surgery; diabetes, endocrinology and bariatric surgery; geriatrics; and trauma services. Numerous investments have been made to upgrade Mount Sinai Morningside, including the installation of new clinical equipment, the introduction of a state-of-the-art electronic medical record (EMR) system, acquisition of best-in-class surgical robotic technology, and the construction of a soon-to-open inpatient unit with all private rooms.

Mount Sinai Morningside has opened a new Ambulatory Care Center at 114th Street and Amsterdam Avenue. The Ambulatory Care Center includes outpatient exam space for a variety of clinical specialties, an imaging center, a cancer and non-cancer infusion suite, and numerous diagnostic and procedural centers. Primary care services are now available in a new space at 91st Street and Columbus Avenue, as well as at 147th Street and Frederick Douglass Boulevard in the Sugar Hill community.

The James P. Jones Daily Management and Incident Command Center was unveiled in 2018, launching Mount Sinai Morningside into a new era of technologically advanced hospital operations. The Command Center leverages the hospital’s EMR system, using data science to provide descriptive and predictive information to decision-makers so that they can deploy resources to deliver the safest and most efficient care possible. The Command Center also facilitates rapid and comprehensive responses to emergency situations inside and outside the hospital. The Center was the first of its kind in the Mount Sinai Health System and is one of a select few in the country.

Mount Sinai Morningside has earned a number of important designations. Two of its clinical services—diabetes/endocrinology and nephrology—are ranked among the best in the country by U.S. News and World Report. Mount Sinai Morningside operates one of just two Trauma Centers certified by the American College of Surgeons located north of 60th Street in Manhattan. It has secured accreditation from the American College of Emergency Physicians as a Geriatric Emergency Department and by the Institute for Healthcare Improvement as an Age Friendly Health System. The Centers for Medicare and Medicaid Services has awarded Mount Sinai Morningside a 4 out of 5 star rating for safety, quality, and patient experience. And the Healthcare Information and Management Systems Society just granted Mount Sinai Morningside its highest rating (Stage 7) for the adoption and utilization of its EMR. Only 7 percent of hospitals across the country have achieved this designation.

“Our community’s capacity to thrive and the enduring connections between West Harlem families is affirmed by the evolution of care found through this hospital,” remarked Jennifer Beisser, Executive Director of Morningside Area Alliance. “As one of our Alliance’s founders, we applaud the hospital’s continued investment in our unique community.”

About Mount Sinai Morningside
Mount Sinai Morningside, a 495-bed acute care hospital with a 174-year history in New York City, is the principal health care provider for the communities located in West Harlem, including Morningside Heights, and it operates one of Manhattan’s few certified Trauma Centers. One of eight hospitals in the Mount Sinai Health System, Mount Sinai Morningside enjoys an outstanding clinical reputation in cardiology and cardiac surgery as well as many other medical specialties, including internal medicine, cancer, geriatrics, trauma, diabetes care, bariatric surgery, and vascular disease. Mount Sinai Morningside is a full-service, technologically advanced, and nationally recognized hospital, and has an ambulatory platform that extends throughout Upper Manhattan. Its connection to the Icahn School of Medicine at Mount Sinai provides access to world-class clinical care and research in a hospital known for its compassion, sensitivity, and commitment to delivering the safest care and best experience to all of its patients.

About the Mount Sinai Health System
The Mount Sinai Health System is New York City's largest academic medical system, encompassing eight hospitals, a leading medical school, and a vast network of ambulatory practices throughout the greater New York region. Mount Sinai is a national and international source of unrivaled education, translational research and discovery, and collaborative clinical leadership ensuring that we deliver the highest quality care—from prevention to treatment of the most serious and complex human diseases. The Health System includes more than 7,200 physicians and features a robust and continually expanding network of multispecialty services, including more than 400 ambulatory practice locations throughout the five boroughs of New York City, Westchester, and Long Island. The Mount Sinai Hospital is ranked No. 14 on U.S. News & World Report's "Honor Roll" of the Top 20 Best Hospitals in the country and the Icahn School of Medicine as one of the Top 20 Best Medical Schools in country. Mount Sinai Health System hospitals are consistently ranked regionally by specialty and our physicians in the top 1% of all physicians nationally by U.S. News & World Report. For more information, visit https://www.mountsinai.org or find Mount Sinai on Facebook, Twitter and YouTube.