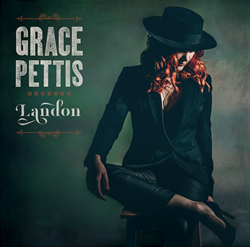 New York City indie label MPress Records has released Landon, the debut single by their latest signing, Grace Pettis. Pettis is an award-winning songwriter from Austin, Texas who is a noted member of the South Austin scene. A little bit folk, a little bit country/Americana and with a whole lot of soul, Pettis has released two DIY albums and the Dallas Morning News has hailed her as "one of the most talented young singer-songwriters in America".

As premiered today by The Bluegrass Situation, Landon is a true story-song written as an unabashed apology from the artist to her gay best friend for not being there when he came out. Deconstructing bias with each masterfully poetic lyric, Pettis puts her own youthful, "traditional" values under the microscope, and the result is a transcendently beautiful testament to the power of change, forgiveness, and the inner strength that comes from standing firm in who you are.

In lieu of tour dates this Spring, starting today Pettis is performing a series of "Weekly Webcast" livestream concerts every Friday at 7:30 pm Central on her Facebook page: https://www.facebook.com/gracepettismusic/

ABOUT GRACE PETTIS
As a card-carrying member of the south Austin scene, Grace Pettis has amassed bragging rights to spare. She is the winner of many of the nation’s most prestigious songwriting contests, including NPR's Mountain Stage NewSong Contest, and has received grants from the Buddy Holly Educational Foundation. Grace’s songs have been recorded by other esteemed artists, including Sara Hickman and Ruthie Foster and she added to her songwriting accomplishments in 2019 by signing a publishing deal with BMG. Catch her with her band at an Austin club, headlining a festival with her trio Nobody's Girl, or on her own, trying out new songs in a little gem of a listening room, somewhere in America. For more information, visit gracepettis.com.