As a continuation of Maharishi University's Sustainable Living program where students learn how to build a tiny house, a group of 12 students studying natural building traveled to the Texas desert and spent 11 days putting up a 14 x 14 adobe bunkhouse made primarily from indigenous materials. 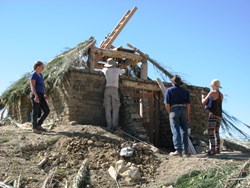 As a continuation of the Sustainable Living Program at Maharishi University of Management where students learn how to build a tiny house, a group of 12 students studying natural building traveled to the Texas desert last month and spent 11 days putting up a 14 x 14 adobe house made primarily from local materials.

They first made 850 adobe bricks from soil near the construction site, created a frame of posts and beams from dead spruce trees harvested beforehand on campus, and then topped the structure with a waterproof thatched roof made of river cane.

"It really has an amazing feel," said course instructor Mark Stimson. "It's rectilinear and oriented toward the cardinal directions, and adobe walls give it an ancient, grounded feeling."

Intended to serve as a bunkhouse for future visitors, it sits on land owned by Mr. Stimson and his wife that's adjacent to Big Bend National Park. Also on site is a tiny house students built last year.

In addition to learning practical construction skills, the students had the opportunity to experience an extraordinary landscape that includes deep vertical canyons, distant mountains, and rock-outcroppings dating back 500 million years, fossils, petrified wood, and a hot spring on the Rio Grande River. Plus the occasional tarantula and scorpion.

"The students had a transformative experience," Mr. Stimson said. "They've never seen anything like this desert, with its vast scale. The heights and distances reset your perspective on things."

Mr. Stimson's desert site is 80 miles from the nearest town on a road too rugged for ordinary cars. The students prepared and canned all their food in advance. That alone was a learning exercise in planning and execution.

They traveled to the site via the Sustainable Living Department bus powered by biodiesel fuel that was made by the students and staff member Steve Fugate.

Every aspect of the construction required learning new skills. The students began their work on campus, creating a plan and estimating the amount of materials they would need.

Once on site, the students learned to sift the soil used for the bricks, moisten it with water, and then use forms to create the bricks. Once skilled, they were able to make a brick in less than a minute.

But then the bricks, all 17,000 lbs. of them, had to be carried up a long hill. The students formed a chain, and accomplished the task with aplomb.

He related an incident of the students trying to prepare and dry adobe bricks, when an early morning desert fog prevented the sun from drying them out. It happened three or four days in a row. Of the many things they planned for, he said, the desert wasn’t one of them! But the sun burned it off by noon each day, and the adobe blocks dried enough to be used.

In order to comply with Maharishi Vedic℠ architecture, they learned how to perfectly align the building by using the North Star and the meridian transit off the sun.

"It's within a quarter or even one-eighth of a degree of being perfectly aligned," Mr. Stimson said.

He said his desert site is intended to serve as a retreat for campus groups and students in other departments, as well as the Sustainable Living students.

Commenting on the success of this course and the happiness of the students who participated in it, Professor Lonnie Gamble, Co-Director of the Sustainable Living Department said, “They’re happy because they’re taking their part in creating the world that they want to live in. I think it brings out a great joy, a great satisfaction, something that many of them have been looking for at other institutions before they’ve come here.” http://link.mum.edu/AdobeHouse

Founded in 1971, Maharishi University of Management (MUM) offers Consciousness-Based℠ Education, a traditional academic curriculum enhanced with self-development programs like the Transcendental Meditation® technique. Students are encouraged to follow a more sustainable routine of study, socializing and rest without the typical college burnout. All aspects of campus life nourish the body and mind, including organic vegetarian meals served fresh daily. Located in Fairfield, Iowa, MUM is accredited by The Higher Learning Commission and offers bachelor's, master's, and doctoral degrees in the arts, sciences, humanities, and business. Visitors Weekends are held throughout the year. For more information, call the Admissions Office at 800-369-6480 or visit http://www.mum.edu.