Indie pianist Isaac Shepard was invited by Pandora to speak with members of Congress on behalf of independent musicians to discuss music streaming royalties and reporting. 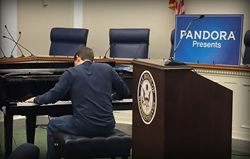 The royalty income I receive from all types of music streaming worldwide has far exceeded my physical CD sales and download sales combined, accounting for over half of my music income.

Indie pianist Isaac Shepard spoke before members of the U.S. Congress on behalf of independent musicians to discuss the impact of music streaming services on the lives of the artists. Shepard was one of three independent artists selected by Pandora Internet Radio to represent the thousands of indie artists who are pursuing full-time careers in the music industry. The prospect of cultivating a sustainable career through platforms such as Pandora is what drove the efforts before lawmakers and leaders on Capitol Hill.

Shepard, whose contemporary piano music recently passed 60 million plays on Pandora Internet Radio, spoke about transparency in reporting for today’s artist. “It’s vital for independent artists to have insight into how their music is being played across all streaming services and how their corresponding royalties are calculated and distributed,” said Shepard, who was selected among thousands of other artists by Pandora to speak in the nation’s capital.

Pandora AMP is one example of a reporting tool that is offered as a resource to artists and managers for that purpose. “Using Pandora AMP, I was able to better understand my fan demographics and see exactly how and when my songs are being played on Pandora. The plays on Pandora generate a significant portion of my income, so much so that I’m not sure I would have been able to pursue music full time without them.” Shepard recently left his career as a software engineer to pursue music composition on a full-time basis. He went on to speak about general music streaming trends. “The royalty income I receive from all types of music streaming worldwide has far exceeded my physical CD sales and download sales combined, accounting for over half of my music income.”

In addition to speaking with legislators and staffers, Shepard also performed several of his piano compositions in the U.S. House of Representatives.

Shepard lives in Southern Orange County, California, and has composed and performed music for over 25 years. He has released seven full-length solo piano albums, most recently “Christmas Piano.” His music has reached #1 on U.S. and international iTunes New Age charts. In addition to Shepard’s solo piano work at IsaacShepard.com, he is the founder of ShepardAudio.com which specializes in music composition and scoring for TV, film, video games, and online media projects.