Quickly climbing to 200,000+ streams, "Right" from the singer-songwriter Mauve has established itself as another smash hit. 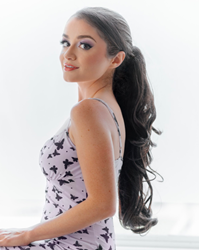 That Eric Alper praised the song's innovative tune: Topping more than 2+ Million plays on her songs across all platforms, award-winning Toronto’s electro chill-pop artist Mauve delivers a rush of synth-pop grooves in her newest single, ‘Right.’

Mauve has released another incredible single: “Right.” Her previous single, “Out of Nowhere,” easily grabbed the media’s attention, and “Right” lives up to its predecessor. Music news sites have rushed to promote the new release and to commend the rapid progression of the chill-pop artist’s career.

Canadian Beats promoted the release of the song’s music video, quoting Mauve’s description of inspiring meaning behind “Right”: “There’s a lot of uncertainty going on in the world this year, but the message from this song is all about that person who is a much-needed balm to those stresses,” Mauve told Canadian Beats. “’Right’ reflects the freedom and fun of not having to go about the serious stuff alone because this person is by your side, and the gleeful intoxication in connecting with that special someone as they help you see the better things in life.”

Mauve won ‘Best of North America’ in the 2019 InterContinental Music Awards and has been featured on a plethora of radio stations and music news sites. Her live performances have enthralled fans at music events like the 2020 Toronto Music Expo and YOUTH DAY Global at Yonge-Dundas Square. Recently, the chill-pop singer was featured in Star Pow-R’s "Buy Local" Concert Series, supporting small businesses and local artists alike. Managed by Canyon Entertainment Group, Mauve’s act is certainly a tough one to follow, and it’s clear her career is headed in the right direction!