Fans of the diligent record producer who have followed his meteoric rise eagerly await the first studio single in over a year from the genre-bending audio architect. Paper Planes by Thousand Times features Shane Hush & Wiggi Music and is a instant classic. 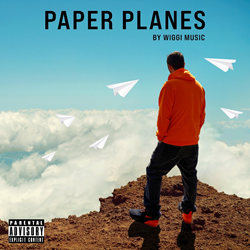 Apocalypse (ἀποκάλυψις) is a Greek word meaning "revelation", "an unveiling or unfolding of things not previously known and which could not be known apart from the unveiling". This "lifting of the veil" is literally what we are witnessing in our day-to-day lives whether one chooses to focus on political, economic, or cultural trends. In the past few months, global events have forced us as a planet to revisit old discussions with new perspective and nuance while simultaneously planting the seeds for fresh conversations. It in this climate of unrest that Thousand Times is embracing the unknown and cultivating relationships with the most unlikely collaborators to achieve out-of-this-world results.

The last time the producer made headlines was just weeks before what would become known as the "new normal". At the time Thousand Times was excited to be giving his first music workshop and had plans of beginning a national speaking tour. Those plans, like many other people's, were promptly dashed. However, what at first appeared to be a swift, underwhelming end to 2020 became a catalyst that propelled the music producer to fully realize his destiny.

In late March motivated by economic pressures Thousand Times began studying how to run a business loan brokerage firm and after an intensive multi-week program founded Lift Off Ventures LLC with the goal of helping business owners secure working capital at competitive rates. From the start, the venture seemed destined to be successful. Fostering relationships with industry leaders such as Answernet, Loan Me and most recently the #1 customer rated credit repair company The Credit People built a strong foundation for the new company.

The trio of artists, Wiggi Music, Shane Hush & Thousand Times, had made a very special record at Soule Jukebox Recording Studios back in January which due to the expected global upheaval was collecting dust. At first, the guys wondered if now would be the right time to release music. Many factors such as limited touring prospects, an over-saturated news cycle, and the ever-looming threat of the unknown made investing in a record seem questionable at best and frivolous at worst. In the end, it was the belief that this record and the message it espouses in needed in today's world, and to deny the culture the addition of such a well-crafted track would be the truly untenable cost. With so much going in the world Wiggi Music, Shane Hush, Thousand Times & a team of top tier music marketing experts focused on building a campaign of branded content that was easily recognizable, communicated effectively, and was memorable long after viewing thus the #PaperPlaneChallenge was born; the brainchild of music manager Jermaine Spencer.

Assembling titans of industry with an eye towards the evolving digital landscape and its impact on music marketing was key in building a cohesive team to support the record. Professionals with years of experience pushing songs such as Ayo Adepoju of We Plug Good Music a digital marketing powerhouse based in the U.K. along with Christian Honore-Phyfier founder of Resist Group a lauded independent artist platform out of Phoenix ensured the record reached the hearts and minds of millions of potential fans worldwide. Additionally, public relations firm One Percent PR ensured the song would reach tastemakers and blogs thus extending its time in the news cycle.

Having built a fortified foundation for marketing the record, Thousand Times began to populate roles within the organization that would support the artists themselves. Consultants such as KiDeMo CEO of True Dreams Radio, Kwanzaa Spears owner of Spade TV, Daylon Jones of Most Wanted Mafia, Sammy Kluttz of Flight Brothers, top-rated hip hop artist ReeCee Raps and Kayo Orsino owner of Roast N Review.

The song Paper Planes was produced by Thousand Times & Shane Hush and written and performed by Wiggi Music, The track has a positive outlook and is accompanied by a catchy upbeat hip hop track. The synth-laden, bass-heavy instrumental is downright gorgeous and has lots of playback value. Equally pleasing is the articulate delivery and quality songwriting provided by Wiggi Music. Early in the track's release as it was being shopped to various media outlets it received a co-sign from American rap star Rittz formerly signed to Strange Music. Love from an established artist set the pace and motivated the team to go harder than ever before.

Following in the footsteps of one of his musical idols, Jay-Z, who emphasized the importance of building your own record label and owning your master records, Thousand Times established Lift Off Music Group, a subsidiary of Lift Off Ventures LLC. Partnering with United Masters on an international distribution partnership with publishing opportunities was the final step in ensuring Paper Planes reached the world. Similarly inspired by, Southside, the legendary producer & founder of 808 Mafia,Thousand Times set out to build a collective of creatives and founded Lift Off Music Network an independent artist resource.

When the producer is not working on his music business, Thousand Times can be found souping up his vintage Benz. The hobby offers a welcomed distraction from the stresses on the music industry. Some other activities the producer loves are volunteering, raising money for charity, and spending time outdoors. Additionally, he provides mentor-ship consultations and independent artist services to artists and labels alike; as well as picks up the occasional modeling gig. To say music producer Thousand Times stays busy would be an understatement. As he looks to cement his place in the zeitgeist of global pop culture he realizes the sky is the limit.

Be sure to stream & share Paper Planes starting 7.1.20 and follow on Instagram to participate in the #PAPERPLANECHALLENGE! You can also purchase Paper Planes merchandise from Thousand Times two e-stores under the Strength In Numbers brand, also a subsidiary of Lift Off Ventures LLC.