The music royalty buyout deal for this musical legend’s entire catalogue reached into a seven-figure sum. 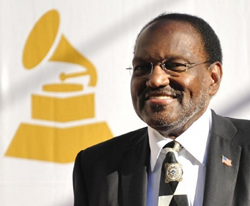 “We are most honored to have worked with the most extraordinary legend Mr. Al Bell,” said Parviz Omidvar, President of Music Royalty Consulting, Inc. “We understand the full value and potential of his creative output and future potential, and we aim to serve Mr. Bell’s financial needs,“ he continued.

It all started for Al Bell one evening in Little Rock in 1971. While meditating after the murder of this brother, he dreamt the words to the eventual hit song “I’ll Take You There”.

In the 1980s, Al Bell went on to become the President of the Motown Records Group (Motown had relocated to Los Angeles from Detroit) and worked with Berry Gordy in the sale of Motown to the MCA/Boston Ventures Group. After that, Mr. Bell discovered the music group Tag Team and released “Whoomp! (There It Is),” which sold over 5 million copies and remains one of the biggest-selling singles in history.

Then, Prince asked Al Bell to release a single record, after Warner Brothers Records turned Prince down. Bell released “The Most Beautiful Girl in the World” and gave Prince his biggest-selling single ever.

Mr. Bell has received many honors and awards, including the National Award of Achievement from the U.S. Department of Commerce. He has been listed in Who’s Who in Black America and was honored by Black Enterprise magazine in 1972 and 1973 as No. 2 in the Top 100 Black-Owned Businesses.

In 2015 Mr. Bell was inducted into the Official Rhythm & Blues Music Hall of Fame.

But he is not finished writing new chapters for his legend. He currently serves as Chairman and Chief Executive Officer of Al Bell Presents LLC, a new “rare performing artist” career and business development paradigm.

Mr. Bell worked with Parviz Omidvar over the course of decades and was happy to work with Music Royalty Consulting, Inc. for his music catalogue buyout deal.

Music Royalty Consulting, Inc. provides established royalty earners with a way to tap into the future royalty streams, and access to much larger sums of money than advances offered by most other companies. This allows music creators to invest in new catalogues or other financial opportunities, or to simply enjoy the fruits of their labor.

Music Royalty Consulting, Inc.’s purchase and sale deals can be made with buy-back options, or can be limited to a fixed time period—customizable based on a royalty earner's needs.

Music Royalty Consulting, Inc. works with music royalties and music catalogues that earn from: PROs such as ASCAP, BMI, and SESAC; music publishers such as UNIVERSAL, WARNER/CHAPPELL, SONY/ATV, and BMG; as well as many record labels and distributors.

Applying is simple and requires basic information including hit songs and recent royalty statements. Please visit the brand-new website at http://www.MusicRoyaltyConsulting.com or call 323.655.5510.

If you have any questions about this release, please don’t hesitate to get in touch with Music Royalty Consulting, Inc.