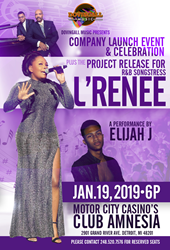 “Detroit is on the rebuild and music is a large part of its revitalization,” adds Dover. “We are excited to put the spotlight on our talent roster and anticipated artists. They are the voices of the future and are building upon a deep melodious heritage and tradition.”

Detroit is known for many things and music is one of them. Its’ Motown legacy has impacted all corners of the world! Dovingall Music, LLC is a full-service production company that plans to build upon the city’s firm musical foundation with the introduction and release of three new artists, R&B balladeer L’Renee; hip hop artist, formerly of Mindless Behavior, Elijah J; and soulful gospel ensemble, Communion. The roster reflects the diversity of the talented production team of Alonzo Dover and Michael Mindingall, the masterminds behind Dovingall Music. The production team will introduce Dovingall Music with a project release celebration on Saturday, January 19, 2019 at 6:00 p.m. at Club Amnesia inside of Motor City Casino at 2901 Grand River Avenue, Detroit, MI, 48201. Guests will be treated to performances by L'Renee from her solo project titled “I’m Done” and ElijahJ is slated to perform his current single.

Both Dover and Mindingall are veterans in the entertainment business. Alonzo Dover is a successful business innovator, entrepreneur and sought-after producer, musician, arranger, composer, and music executive. In 2002, he founded The Upper Room Entertainment Complex in Detroit with his wife Pamela. This thriving business became a mecca in Michigan featuring a roster that included performances by Jennifer Holiday, Vickie Winans, The Clark Sisters and Tonex to name just a few. The Upper Room was also known for the “2nd Saturday Comedy Night” which showcased the likes of comedians Brandon Jackson, Akintunde, Small Frye and Jonathan Slocum. A hub for jazz performances as well, Tim Bowman, Randy Scott, Paul Dozier and Bobby Lyles were just a sprinkling of the talent presented there. A shining beacon of the community, the Upper Room was the birthplace for 17 ministries and the venue site for more than 6,000 events. In addition, Dover has worked on several projects with networks executing talent contests for BET and the Gospel Music Channel and hosting the premiere of the hit sitcom ‘Blackish’ on ABC Network.

“Detroit is on the rebuild and music is a large part of its revitalization,” adds Dover. “We are excited to put the spotlight on our talent roster and anticipated artists. They are the voices of the future and are building upon a deep melodious heritage and tradition.”

Michael Mindingall is a highly sought-after Grammy Award winning producer, writer, instrumentalist and arranger from Detroit, Michigan. His list of musical accomplishments reads like a who’s who of major artists and performers. From his first professional experience as a pianist for superstar Jennifer Holliday, to working with the Queen of Soul Aretha Franklin, Motown legend Diana Ross, gospel legend Yolanda Adams and R&B star Tyrese, Mindingall has made his mark across the music industry. His expansive work with Motown legends makes him a collaboration favorite of some of the top names in the industry. Mindingall’s work with Aretha Franklin earned him a Grammy Award in 2006 for a tribute to Luther Vandross’ recording “A House Is Not a Home.”

“We envision Dovingall Music to continue the rich music legacy of Detroit. Our plans are to bring back full artist development and produce timeless music,” expresses Mindingall.

Performers for the evening, L’Renee and Elijah J promise to light up the night! L’Renee will perform several songs from her new solo project titled “I’m Done”. She has been recording music since 2005 and caught the attention of Universal Motown recording artist, KEM nearly 10 years ago. She continues to work with KEM as a background performer and was a duet collaborator on his Billboard R&B #1 hit song, “Don’t Say Goodbye.” Her background work with Kem also led her being signed to his label, Kemistry Records. She has performed all over the world with Kem and often receives standing ovations for her solos and accompaniments.

A native of Detroit, Elijah J began his career by playing the character of Young Simba in the Disney Broadway production “The Lion King.” He was an original member of Kids Bop, a brand of compilation albums featuring children performing contemporary popular songs and previously a member of the boy band, Mindless Behavior.

The event will be live streamed here https://tinyurl.com/DovingallLivestream beginning at 6:45pm on Saturday January 19th and also on Facebook https://www.facebook.com/Dovingallmusic/