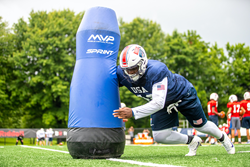 Columbia Tech has helped us accelerate the product launch cycle for MVP's robotic training systems. Our partnership with Columbia Tech allows us to flex our team as needed to achieve aggressive timelines and meet market demands.

Columbia Tech is proud to announce their manufacturing partnership with MVP Robotics, the creators of the world’s first robotic tackling dummy that helps improve performance, reduce injuries and minimize unnecessary player on player contact during practices. The dummies are the result of a collaborative effort between Dartmouth’s head football coach, Buddy Teevens, and a group of student-athletes and engineers from Dartmouth's Thayer School of Engineering to help decrease the number of head injuries suffered during practice.

The “Mobile Virtual Player” (MVP) can successfully mimic a charging lineman or linebacker during training sessions while drastically reducing incidents of head injuries in players. In Dartmouth’s first two years using the MVP tackling dummies, the school recorded a 58% reduction in concussions. In addition, the robotic training systems have served as a safer practice option during the COVID-19 pandemic and have allowed teams to continue practicing and simulating game situations while limiting direct contact between players.

The technology has been well-received from inception, with the first run of MVP|DRIVE units selling out and going to half of the NFL, over 40 colleges and more than 75 high schools. Seattle Seahawks quarterback, Russell Wilson, has been a strong advocate of the technology and has recently joined the MVP team as their Chief Football Advisor. MVP has released a new model that has been designed to fit the needs of high school and youth programs. The new model, dubbed the MVP|SPRINT, was developed in collaboration with and will be manufactured by Coghlin Companies’ subsidiary, Columbia Tech.

“Columbia Tech has helped us accelerate the product launch cycle for MVP's robotic training systems. Our partnership with Columbia Tech allows us to flex our team as needed to achieve aggressive timelines and meet market demands," said MVP CTO and Co-Founder, Quinn Connell.

“We’re very excited to be working on a project that will have such a positive impact and provide a safer practice environment for athletes. It’s an innovative and game-changing piece of technology, and we’ve developed an excellent working relationship with the team at MVP Robotics to ensure successful commercialization,” said Chris Coghlin, President and CEO of Coghlin Companies.

Columbia Tech’s product development team is comprised of highly skilled engineers and technicians with extensive knowledge of the product development process. The Caring Associates at Columbia Tech provided full design and engineering support to the MVP team, as well as scalable manufacturing to commercialize a product that would meet their goals.

ABOUT MVP ROBOTICS
MVP began as a collaboration between Dartmouth Head Coach Buddy Teevens and a group of engineers and athletes from Dartmouth's Thayer School of Engineering. Together, they developed and patented the world’s first self-righting robotic tackling dummy to help reduce unnecessary player-on-player contact and the overall incidence of injuries suffered during football practices. MVP’s robotic tackling dummies were specifically engineered to replicate the performance and size of a skilled player, enabling teams to get game-like reps in a safer, more effective way. At Dartmouth, concussions were reduced by 58% in the first two seasons of implementing the MVP|DRIVES into practice. MVP completely sold units to half of the NFL teams, over 50 colleges, and more than 100 high schools. Following the successful development and introduction of the world’s first robotic tackling dummy (MVP|DRIVE) for football, MVP has continued developing their patented robotic system to create their newest and most affordable robotic tackling dummy the "MVP|SPRINT" to fit the growing needs at the college and high school programs and "HEKTR "(Humanoid Engageable Kinetic Training Robot) a live-fire robotic target system built to fit the realistic tactical training needs of the military & law enforcement. MVP has successfully completed Phases I & II of an SBIR awarded through the Air Force and is currently training with Tier 1 Special Forces units.