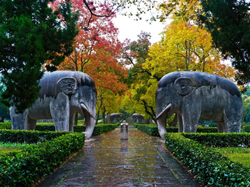 By searching the new hashtag #FourSeasonsOfNanjing, travelers can explore this sophisticated metropolis where the remains of past empires gracefully intersect with contemporary Chinese culture in spring, summer, autumn, and winter.

As travelers around the world dream about their next global getaway, the Nanjing Municipal Bureau of Culture and Tourism invites them to get inspired by exploring the historic destination’s seasonal wonders on Instagram. By searching the new hashtag #FourSeasonsOfNanjing, travelers can explore this sophisticated metropolis where the remains of past empires gracefully intersect with contemporary Chinese culture in spring, summer, autumn, and winter. Here are some of the seasonal highlights to consider when dreaming of, or planning, a trip to China including Nanjing:

SPRING
Nanjing comes alive in the springtime, and there is no better place to be than on Purple Mountain, one of the city’s most picturesque natural areas and home to some of its most important historic sites. In March, Purple Mountain also serves as the main venue for the Nanjing International Plum Blossom Festival and is one of China’s most famous locations to view these vibrant seasonal blooms. While on Purple Mountain visitors should not miss the Xiaoling Tomb of the Ming Dynasty, a 600-year-old UNESCO World Heritage Site flanked by the half-mile long Sacred Path, along which four pairs of stone warriors and 12 pairs of mythical creatures play guard to the deceased emperor. Another point of interest is Dr. Sun Yat-sen’s Mausoleum, a magnificent site covering nearly 20 acres. Visitors who ascend 392 steps to reach the mausoleum of the father of the Republic of China are rewarded with spectacular views of the surrounding area.

SUMMER
Nanjing can get steamy in the summer, but the city offers plenty of opportunities to cool off. In June, the city hosts the annual Dragon Boat Festival races on Mochou Lake Park in the heart of the city. Relief from the heat of the day is also available by hopping aboard a traditional boat to enjoy a sightseeing tour of the Confucius Temple Scenic Area and take in cultural performances on the banks of Nanjing’s “Mother River.” Other outdoor experiences to consider include a visit to Xuanwu Lake Park to view its elegant lotus plants in the heart of the city and a nighttime stroll over the Nanjing Eye Pedestrian Bridge.

AUTUMN
Autumn is arguably the most desirable time to visit Nanjing, as temperatures begin to cool down to the mid-to-high 60s Fahrenheit and, later in the season, the city’s abundant trees trade their green leaves for shades of amber, gold and auburn. Some of the best spots for leaf peeping include Qixia Temple, known for its vibrant red maples; Meiling Palace, where aerial views show the fall foliage as a sapphire necklace with the palace sitting as a central pendant; and the quiet outdoors surrounding Liuhui Waterside Pavilion.

WINTER
In Nanjing’s chilliest months, a thin blanket of white snow often adds charm to the city in time for China’s largest lantern festival. During the Qinhuai International Lantern Festival, held annually on the 15th day of the first lunar month (typically in February), Nanjing’s Confucius Temple Scenic Area is lit by countless red lanterns in neighboring streets, stores, and homes. Traditional folk arts and cuisine are available all around the city. Following the festival, visitors can head to the countryside for a few days of relaxation at Tangshan Hot Spring Resort which boasts hot springs dating back more than 1,500 years.

About Nanjing
Nanjing, the capital of Jiangsu Province, is situated in the Yangtze River Delta area 190 miles northwest of Shanghai. Recognized as one of the four great ancient capitals of China, Nanjing has served as the capital city of 10 Chinese dynasties and regimes for a total of more than 1,800 years. A sophisticated metropolis and a modern center of history, education, and culture, Nanjing is home to some of the country’s most significant historical attractions such as the Xiaoling Tomb of the Ming Dynasty, a UNESCO World Heritage Site; Dr. Sun Yat-sen’s Mausoleum; The Presidential Palace; and a City Wall that dates back more than 600 years. Popular attractions also include China’s oldest public library and one of the country’s first museums, the Nanjing Museum.