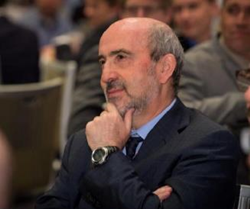 The Vertical Flight Society, the world’s leading professional society dedicated to advancing vertical flight, announced today that Fabio Nannoni has been selected for the prestigious 2021 Alexander A. Nikolsky Honorary Lectureship. The Lectureship is awarded to “an individual who has a highly distinguished career in vertical flight aircraft research and development and is skilled at communicating technical knowledge and experience.”

Nannoni is the Senior Vice President for Safety Management Governance for the Leonardo Company’s Helicopter Division, based in Cascina Costa, Italy. This, the 41st Annual Nikolsky Lecture, will be entitled, “Rotorcraft Design: The Crucial Influence of Safety from Concept to Fleet Support,” which Nannoni will publish as an authoritative article and deliver in an hour-long presentation.

Nannoni was nominated for his fundamental contributions to the methodologies and design solutions embedded in the rotorcraft at Leonardo Helicopters (formerly Agusta and AgustaWestland). In his career spanning nearly 40 years — spent in all of the rotary-wing disciplines and ranging from preliminary design to the management of Design Organisation Approval (DOA) and airworthiness of helicopters in service — Nannoni has led the company’s engineering directorate through technological challenges, fostering an innovative culture. He is one of the architects behind the company’s successful “Family Concept.”

Nannoni has always paid attention to the human elements of his roles, as testified by the next generation of technicians and managers now making their contributions to the company’s continuous development. He has demonstrated a lifelong commitment to the rotary-wing discipline, carried out with his own maximum energy and with a broad spectrum of interests, up to the current challenge of the operational implementation of “Safety Management Systems.”

Nannoni received his Master’s Degree in Aeronautical Engineering from Politecnico di Torino in 1982. After a brief time as an aerodynamics analyst at Aeritalia (now part of Leonardo’s Aircraft Division), Nannoni joined Gruppo Agusta (as it was then known) as a performance analyst. During his career, he developed more than 50 proprietary codes in the field of helicopter flight science and analysis, which are still actively used in the company’s design process. He has participated, with increasing responsibility, in the management of complex projects in multinational and multicultural environments, e.g. the A109 Power; the A129 International; the definition of the joint venture platforms such as the EH101 (now AW101) and NH90; the new “AW Family” of AW139, AW169 and AW189; and the ERICA and the AW609 tiltrotors.

Nannoni has directly influenced the architecture and the design choices of the company’s new product range with full responsibility for the definition of the new generation models of the “AW Family.” The innovations introduced have been recorded in several international patents in his name and in the Italian Innovation Award attributed in 2010 to the company.

Over the past 10+ years, in his role of Senior Vice President of Engineering, Nannoni was also deeply involved with “internal customers” at the various production sites of the company, collaborating with Leonardo’s Centres of Excellence to improve the quality and the manufacturability of Leonardo’s aircraft and components. He conducted this in the spirit of concurrent engineering and industrialization processes optimization, imprinting the digital manufacturing evolution of Leonardo’s Helicopter Division.

Throughout his career, Nannoni never stopped contributing to the aspects of design and innovation, always keeping in mind the final users and their safety, personally leading the integrated design teams responsible to manage product improvements, especially when impacting the airworthiness and the safety of the company’s helicopters.

During his career, Nannoni worked and interfaced with the requisite national and international, civil and military aviation authorities on many complex certification programs, including the EH101, NH90, A109 Family, A119 Koala, AW139, AW149, AW169, AW189 and AW609. As a result, Nannoni’s nomination was enthusiastically endorsed by a wide range of supporters in industry, government and academia from around the world, including colleagues, professors, suppliers, customers, government officials and military leaders.

Nannoni will present the Nikolsky Lecture at the Vertical Flight Society’s 77th Annual Forum & Technology Display, planned for Tuesday afternoon, May 11, 2021, at the Palm Beach Convention Center in West Palm Beach, Florida. He will then be honored the following evening at the Forum 77 Annual Grand Awards Ceremony with the presentation of the Alexander A. Nikolsky medallion and certificate. A detailed written treatise expanding his lecture will be featured in the Journal of the AHS, the world’s only scientific journal dedicated to vertical flight. Information on Prof. Alexander A. Nikolsky and prior Nikolsky Lectures is available at http://www.vtol.org/nikolsky.