In an open letter posted on their blog, also sent to NASA Administrator Jim Bridenstine, Friends of Science Society asks NASA to update their climate change website to reflect the broader diversity of views on climate science, rather than the existing flawed consensus claims. 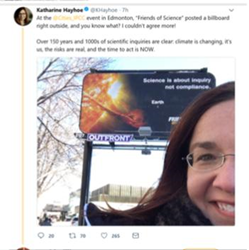 NASA should update their climate change website to include diversity of views rather than flawed consensus claims says Friends of Science Society, in an open letter posted on their blog and sent today to NASA administrator Jim Bridenstine.

Since the inception of consensus claims, with Naomi Oreskes’ 2004 letter in Science Magazine being one of the best known, there has been concern. Roger Pielke, Jr. responded to Oreskes’ claims of consensus in Science Magazine, May 13, 2005, “Our policies should not be optimized to reflect a single measure of the central tendency or, worse yet, caricatures of that measure, but instead they should be robust enough to accommodate the distribution of perspectives around that central measure, thus providing a buffer against the possibility that we might learn more in the future”

Oreskes’ survey was famously cited in Al Gore’s “An Inconvenient Truth”. However, in 2005 Benny Peiser of the GWPF reran the survey using Oreske’s search parameters. His results revealed that out of 1117 citations which mentioned the term ‘global climate change’: only 13 authors (1.2%) explicitly supported a catastrophic view; 470 articles stated the keywords but stated no position on causes. The research focus of the bulk of other papers was on impacts, mitigation, methods, or paleoclimatology. In addition, 44 papers favored natural causes while 34 rejected the 'consensus' view. These results are discussed in Friends of Science Society’s 2014 report entitled: “97% Consensus? No! Global Warming Math Myths and Social Proofs.”

On the NASA Climate Change website, Doran and Zimmerman (2009) is presented as a 97% consensus study. A closer look at Zimmerman’s original research “The Consensus on the Consensus” reveals that she herself wrote “I can honestly say that I have heard very convincing arguments from all the different sides, and I think I'm actually more neutral on the issue now than I was before I started this project.”

In the guide “On Being a Scientist: Responsible Conduct in Research” published by the National Academies Press, the authors point out that: “Science has progressed through a uniquely productive marriage of human creativity and hard-nosed skepticism, of openness to new scientific contributions and persistent questioning of those contributions and the existing scientific consensus.”

Consequently, hard-nosed skepticism is an integral part of scientific inquiry and should be presented in the evidence that NASA presents to the public, says Friends of Science Society.

A Dec. 19, 2016 paper “97% Consequential Misperceptions: Ethics of Consensus on Global Warming” …"outlines why a claimed consensus is a powerful tool for driving public policy, but an inappropriate and unethical means of conducting scientific inquiry or informing the public.”

Friends of Science Society have produced a humorous video posted on their YouTube page called “The DeConsensus Project” using Vulcan Logic to explore the flaws of consensus thinking on climate change.