Creator of Brainwave Optimization®, Brain State Technologies® recently announced the presentation of notable results from a group of individuals with symptoms such as PTSD and sleeping issues following traumatic brain injury. 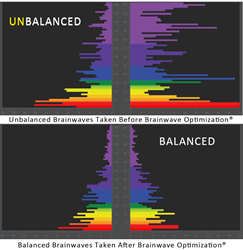 More individuals unfamiliar with this efficient, drug-free, non-invasive process are becoming interested in trying it.

“Most of our clients come to us from their therapists, doctors, or from word of mouth,” says Nelson. As research efforts continue and more and more reports of sound evidence supporting the effectiveness of Brainwave Optimization® are publicized, more individuals unfamiliar with this efficient, drug-free, non-invasive process are becoming interested in trying it. This study is one of many that have been conducted at Wake Forest Baptist Medical Center to investigate the role and value of Brainwave Optimization® for a variety of health objectives.

About the Study
The presentation was made at the International Brain Injury Association‘s Tenth World Congress on Brain Injury in San Francisco on March 21. The study was conducted at the Medical Center in Winston-Salem, N.C., by Charles H. Tegeler, M.D., professor of neurology, and was made possible by a research grant from The Susanne Marcus Collins Foundation, Inc. “This new technology is intended to allow the brain, on its own, to relax, and to shift towards improved balance, which may result in improved symptoms,” says Tegeler.

Participant’s Results
The participants in this case series had histories of traumatic brain injury related to military service, sports, or other accidents. They received an average of 16 HIRREM™ sessions, 90 minutes each, over 13 days. According to the researchers, study participants reported improved sleep and fewer symptoms related to depression and post-traumatic stress.

About TBI
A traumatic brain injury (TBI) is defined as a blow or jolt to the head or a penetrating head injury that disrupts the function of the brain. Traumatic brain injury can have devastating consequences and may include a host of associated symptoms, including chronic headache, dizziness, insomnia, depression, cognitive difficulty, and impaired work functionality and social relationships.

Each year in Tennessee, approximately 8,000 people are admitted to the hospital with a brain injury. According to the Department of Health an estimated 1.7 million people sustain a TBI annually in the U.S. Direct costs associated with the treatment of TBI are estimated at $76.3 billion annually in the United States alone.

About Polly Nelson
Director Polly Nelson founded Nashville Neuro-Training in 2009 after undergoing training at the corporate offices of Brain State Technologies® in Scottsdale, Arizona, and is one of the early practitioners of the breakthrough technology known as Brainwave Optimization®. After experiencing remarkable relief from social phobia symptoms following Brainwave Optimization®, she decided that she wanted to help others by offering the service in her hometown of Nashville.

Polly and her staff meet with clients that have common complaints of anxiety, insomnia, addiction, anger, headaches, and inability to focus. She has experience working with high school, college and professional athletes, as well as Veterans, who have endured a concussion (or traumatic brain injury) and reported significant relief after Brainwave Optimization® sessions.

About Nashville Neuro-Training
Nashville Neuro-Training is the leading Brainwave Optimization® provider in middle Tennessee offering a cost-effective and efficient modality for those experiencing persisting symptoms from a traumatic brain injury or coping with anxiety, insomnia, PTSD, depression, anger, addiction, ADD, or chronic pain.

Conveniently located in Brentwood, TN, Brainwave Optimization® is provided at our office six days a week with extended hours and affordable prices for initial assessments and sessions. Contact Nashville Neuro-Training to schedule an appointment or learn more about this breakthrough technology.