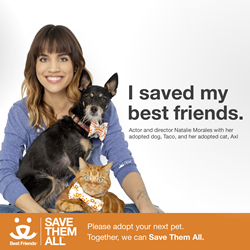 "Best Friends is an aptly titled organization because they truly help you find your best friend." Natalie Morales

Actress and director Natalie Morales can be seen starring in the new NBC comedy “Abby’s” (premiering on March 28) as a tough-talking bartender who has a soft spot for the group of misfits who frequent her unlicensed watering hole. In real life, Morales is a champion for homeless pets.

Morales adopted her dog and cat and couldn’t be a prouder pet parent. Her film credits include “Battle of the Sexes”, “Spider-Man: Into the Spider-Verse” and “Stuber” which is due out this summer. She is also known for numerous memorable television roles including “Santa Clarita Diet”, “The Grinder”, “The Newsroom” and “Parks & Recreation’.

“My life would be so lonely and boring without Taco and Axl. They make every day better and I’m so lucky I found them,” Morales said. “Best Friends is an aptly titled organization because they truly help you find your best friend. There’s a homeless pet waiting for you to come find them. What are you waiting for?"

The campaign was designed to compellingly illustrate the national animal welfare organizations’ Save Them All ‎call to action to end the killing of shelter pets by 2025. Best Friends has brought increased awareness to how people can get involved in the solution by adopting, spaying/neutering their pets, donating, volunteering and sharing this message with their friends.

To find an adoptable pet, learn more about fostering, or other ways to get involved and Save Them All, visit http://www.bestfriends.org.

About Best Friends Animal Society
Best Friends Animal Society is a leading national animal welfare organization dedicated to ending the killing of dogs and cats in America's shelters. In addition to running lifesaving programs in partnership with more than 2,500 animal welfare groups across the country, Best Friends has regional centers in New York City, Los Angeles, Atlanta and Salt Lake City, and operates the nation's largest no-kill sanctuary for companion animals. Founded in 1984, Best Friends is a pioneer in the no-kill movement and has helped reduce the number of animals killed in shelters nationwide from an estimated 17 million per year to about 800,000. That means there are still nearly 2,200 dogs and cats killed every day in shelters, just because they don’t have safe places to call home. We are determined to bring the country to no-kill by the year 2025. Working collaboratively with shelters, rescue groups, other organizations and you, we will end the killing and Save Them All. For more information, visit bestfriends.org.