‘Sundance for the Troops’ bridges the gap between the military and civilian communities through film; virtual film screenings to be held in Fall 2020, with full festival moved to Spring 2021. 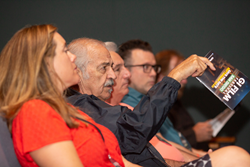 Organizers of the GI Film Festival San Diego, a military-themed film festival that presents films and events for, by and about military service members and veterans, announce KPBS, a public media station in San Diego, California, as the sole producer of the national film festival. All activities will now originate in San Diego, including the awards competition, judging, and in-person film screenings. The full festival is scheduled for May 18-23, 2021, allowing for additional time to plan screening events outside of current COVID-19 limitations.

The national GI Film Festival was founded in 2006 by U.S. Army Veteran Laura Law-Millett and her husband Brandon Millett, to foster greater public understanding of the military experience through film, television and live special events. For over a decade, the award-winning GI Film Festival happened annually in Washington, DC in the spring from 2006 to 2017. Additional events were hosted on military bases around the country and in Los Angeles, California. In 2015, the GI Film Festival worked with KPBS to bring “Sundance for the Troops” permanently to San Diego to help expand the festival’s footprint. The shift to the West Coast was only natural as San Diego boasts one of the largest military populations in the U.S., with seven major military bases between the Navy, Marines and the Coast Guard. San Diego County has the third largest veteran population in the U.S. with more than 240,500 veterans and more than 100,000 active duty members. In 2018, the GI Film Group announced San Diego would be the home for the national film festival for that year. This year, KPBS officially acquired the GI Film Festival making San Diego the home for the national festival now and for years to come. The Milletts will remain advisors to KPBS moving forward.

“As the first military film festival in the country, the GI Film Festival provided a voice for the military community in entertainment and we are so proud to have helped deliver hundreds of films into the marketplace showing the honor and courage of those who serve,” says Brandon Millett. “And now, under the leadership of KPBS, we have no doubt that the festival will continue to grow and encourage filmmakers everywhere to share their stories.”

To also continue its mission to engage audiences, inspire filmmakers, and celebrate authentic storytelling, the festival will present a virtual screening showcase on Oct. 1 and 2, 2020. Titles and filmmaker participation to be announced later this summer, and films will be hand-selected by festival organizers.

Looking Back on the History of the GI Film Festival San Diego
In its six year history, the festival has presented 164 films and attracted thousands of attendees. Each film tells a compelling and unique story that may challenge the festival-goers' notions about what it means to serve and goes beyond one-dimensional depictions of veterans, service members, their caregivers, and families. The festival also holds in-depth panel discussions after each film block to help reduce the military-civilian divide. There is also an opportunity for San Diego area filmmakers to share their work and celebrate the growing San Diego film community, through the festival’s Local Film Showcase, organized in partnership with the Film Consortium San Diego.

Film Submissions Now Accepted for 2021 GI Film Festival San Diego
From documentaries and narratives to shorts and feature-lengths, festival organizers are looking for filmmakers worldwide to submit their works for consideration for the 2021 awards competition. Film submissions can include storylines or narrative arcs about the military experience (past or present day; USA or international-during service; back home after service, etc.). Civilians, active duty and veterans are welcome to submit content between May 25, 2020 and January 20, 2021. For complete submission requirements, deadlines, sponsorship opportunities, and more information on the GI Film Festival San Diego, please visit GIFilmFestivalSD.org.