Nominations for the 2019 Armed Forces Insurance Military Spouse of the Year open on January 2nd! Entering its twelfth year, this award program honors military spouses from all six branches of the Armed Forces who are making a difference in their communities throughout the country. Visit msoy.afi.org to nominate. 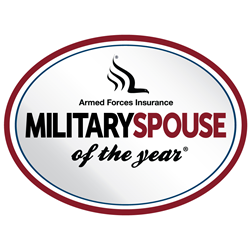 Our United States military members hold many great qualities in their commitment to country, strength in the face of adversity and compassion for the communities and nations they protect. But behind these military service members are the more than 1 million military spouses who mirror these same qualities. And so for the twelfth year nominations for the 2019 Armed Forces Insurance Military Spouse of the Year® (MSOY) will open on January 2. The award program honors military spouses from all six branches of the Armed Forces who are making a difference in their communities and throughout the country.

January 2 through January 31, Americans can nominate inspiring military spouses who are making strides to improve the lives of their fellow military service community, but extending into the communities they live and work in. The nomination form can be found at msoy.afi.org where nominators can highlight the military spouse’s impact on his or her family, community and country.

Past recipients of the Military Spouse of the Year® award were recognized for their work on many different platforms. Whether working with Gold Star families to help those who have lost a loved one in battle; influencing legislation making resources available for military families with exceptional medical needs; advocating for suicide prevention; working with groups focused on PTSD; or working on behalf of the entire military spouse community on employment issues; the range of issues that these spouses have put their passion behind is expansive and ever growing.

In the Fall of 2018, Armed Forces Insurance (AFI) assumed all ownership over the Military Spouse of the Year® program after acting as the title sponsor for the last nine years.

“The military spouse community is a strong one and each year as we accept these nominations are simply blown away by the breadth of platforms and causes these amazing men and women put their time and talents behind,” says Lori Simmons, chief marketing officer at Armed Forces Insurance. “This program has truly given a voice to those who do so much for our military community and country, but do not seek recognition for it. Armed Forces Insurance takes great pride in continuing to provide this platform for our new nominees while also bringing together alumni from past years.”

Nominations will be accepted January 2-31 across all six branches of the United States military: Army, Marine Corps, Navy, Air Force, Coast Guard and National Guard. Nominees will then be organized at the base, district (Coast Guard), and state (National Guard) level. Nominees are judged on five core criteria: overall involvement in military community, exhibition of leadership skills, community building capability, communication skills and overall personal story. Voting to select winners will be held in multiple phases:

The overall winner will be named at an awards dinner on Thursday, May 9 at Fort Meyer in Arlington, VA in conjunction with National Military Spouse Appreciation Day which occurs on May 10.

“This award has legitimized all I have accomplished over the last five years,” said Krista Simpson Anderson, 2018 Armed Forces Insurance Military Spouse of the Year. “It has provided me with a piece to my resume that I was missing and has given me an invitation to the table to create a greater impact in our community. The military spouse community is more tight-knit than ever because of this program and I encourage anyone who knows a spouse doing great things to take the time to nominate them.”

About Armed Forces Insurance:
Armed Forces Insurance was founded in 1887 by military leaders with a single mission: to protect the property of those who protect our nation. The company provides premium quality, competitively priced property and casualty insurance to military professionals throughout the United States and overseas. Armed Forces Insurance understands that its members have unique circumstances and insurance needs, enabling the company to offer a level of personalized service that's unequalled in the industry. For more information, visit the website at http://www.afi.org or call 1-800-495-8234, and follow us on LinkedIn, Facebook, Twitter and Instagram.