Paul Kuhn, a native Cincinnatian, collaborated with Nine-time Emmy winner Wes Boatman and Well-known Recording Engineer Mike Duffey, on his Second CD. Fade to Sunrise is a collection of songs based on acoustic guitar, keyboards and occasional, creative saxophone. 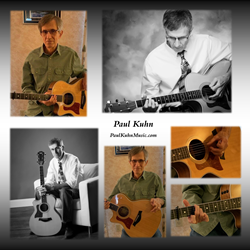 Paul Kuhn through the Years

“The great thing about my songs is that you can listen to them as background music, or you can just relax and focus in on the clear, incredible sounds. I feel very lucky to be able to continue to create this kind of music and share it with my generation and the generations that follow,” Paul said.

Native Cincinnati musician, Paul Kuhn, released his second CD recently. Fade to Sunrise, which was inspired by his love of new-age/acoustic guitar based music from such greats as Alex De Grassi, Michael Hedges, Crosby, Stills & Nash, and Joni Mitchell, just to name a few.

“As a life-long guitarist, I have played in several bands, but never considered myself a composer until I realized that the instrumental music I was listening to, and loved, was definitely something I could produce. My first CD, The Moon Followed Me Home, (2018) was well received and encouraged me to complete Fade to Sunrise.” Paul said.

Having grown up in Cincinnati, Paul played in several local bands including Haymarket Riot, The Twist and most recently Sorry Charlie. As a member of the band, the Twist, one of the band's original songs appeared on the 1982 WEBN Album Project, a collection of songs from bands and musicians from the Greater Cincinnati area.

Paul also added guitar parts in the music for commercials for Nickelodeon, including products advertised on Land of the Lost and Saved by the Bell. But his newest music has taken his talent to a whole new level.

“The COVID-19 pandemic has provided me time to really stretch my musical abilities,” Paul said. “I have found my fingers literally doing things I never imagined I could do on the guitar. I have written 13 new songs and am looking forward to some studio time this year to collaborate once again with Wes Boatman and Mike Duffey.”

This long-time friendship with fellow band members, Wes Boatman and Mike Duffey, have inspired him to continue to expand and hone his music. Wes Boatman has been nominated 27 times for Emmys and has won nine of them. He is an incredible musician and composer. Mike Duffey, also an accomplished musician, is best known for his musical recording, directing and producing abilities.

With the release of Fade to Sunrise, Paul is hoping to expand his listener base and offer more people the ability hear his music on a wide variety of stations and streaming venues that appeal to Baby Boomers. While Boomers are not his only fans, many appreciate the sounds and tunes that make up New Age music genre.

“The great thing about my songs is that you can listen to them as background music, or you can just relax and focus in on the clear, incredible sounds. I feel very lucky to be able to continue to create this kind of music and share it with my generation and the generations that follow,” Paul said.

To learn more about Paul Kuhn’s music and follow his career, stream his music on Amazon or visit his web site at http://www.paulkuhnmusic.com. His music is also available on Jango.com and many digital outlets such as Spotify, iTunes or Pandora Plus.