The recently published Global Compass 2019 confirms Canada's importance on the international wine market, identifying it as the second most attractive country after the United States. Taking advantage of this decisive moment, the European project Native Grape Odyssey (NGO) will hold a course on wine, along with a Walk-Around Tasting from September 15th to 19th. It will strive to build on the experiences of Daniele Cernilli who has been asked to teach the course; NGO’s ultimate goal is to use education as a means to convey the importance of European quality labels. 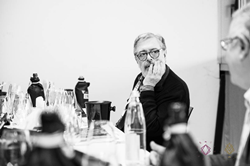 Daniele Cernilli, wine critic and journalist, will teach the NGO Maestro course in Canada from September 15th to 19th.

the European wine market in Canada enjoys a prosperity that offers opportunity for future growth. The organizers of the European NGO project intend to use this favorable window as a springboard to create an even greater appreciation of European wines within this nation.

The wait is over, the Native Grape Odyssey (NGO) Maestro program will finally make its debut on September 15th, at the Peter Pan Bistro in downtown Toronto, Canada. The program is intense: a four-day course that will culminate with a final exam, followed by a Walk-Around Tasting that will include 250 labels. The 40 students who have been selected to take part in the course were chosen among the Canadian wine sector’s educators, importers, sommeliers and other wine professionals; they will be initiated into the complex and fascinating world of Spanish and Italian wines and vines. To train the future heroes of European wine, the NGO program chose none other than Daniele Cernilli, aka Doctorwine, co-founder of the publishing house Gambero Rosso.

The choice of Canada as a destination for this course was not random, the selection was dictated by its importance as a global wine market player, for its involvement with European wines in particular. Just think that, according to the Organisation Internationale de la Vigne et du Vin (OIV), in 2018 Canada was the sixth country in the world in terms of quantity of liters of wine imported. Additionally, consider that 52% of world exports are made by three European countries, namely Italy, France and Spain (Indebox's World - Wine - Market Analysis, Forecast, Size, Trends and Insights); you can see how prominent the European and Canadian commercial ties are. The importance of the Canadian market was recently confirmed by Global Compass 2019, the Wine Intelligence survey aimed at identifying the fifty most attractive global wine markets; Canada was placed on the podium ranking second place, after the United States. According to Wine Intelligence, also and above all, the signs are positive for those countries like Canada, where the wine trade is regulated through a monopoly system: "Several retail alcohol monopolies around the world are also undergoing periods of reform that are liberalizing the trading environment for wine and allowing consumers more freedom and choice in what they can purchase”.

Therefore, the European wine market in Canada enjoys a prosperity that offers opportunity for future growth. The organizers of the European NGO project intend to use this favorable window as a springboard to create an even greater appreciation of European wines within this nation. The activities carried out within this project will be twofold: a five-day course on European wine (September15th-19th) and a Walk-Around Tasting (September 19th).

As the name "Native Grape Odyssey" suggests, the NGO Maestro course will focus on native European vines, in particular Italian and Spanish vines. The course will follow an all-inclusive approach, first of all, instructing students on the history and geography of these varieties, so as to understand how they enshrine the different characteristics of the vines, and consequently, unpack the wines made from them. The syllabus also includes wine labelling laws, so that at the end of the course students can get an understanding of the brands used in Europe to identify quality agricultural and food products protected under PDO and PGI regulations.

Daniele Cernilli, teacher of the NGO Maestro course, is also an avid believer in the importance of the denominations of origin. When asked how a consumer can identify a quality wine, he replied: "The fundamental thing is to trust the denominations, especially [as far as Italy is concerned] the DOCG, because they are a serious system" (interview TG1). As co-founder of the influential wine body Gambero Rosso, for which he has been director of the Italian Wine Guide over the last 24 years, Cernilli has a deep knowledge of Italian wine. A wine judge for international competitions and selections, such as the Decanter World Wine Awards (DWWA) and Vinitaly's 5 Star Wines, Cernilli can boast that he has tasted more than 150,000 wines from all over the world throughout his career.

In a similar way, students will have the opportunity to experience theory in tandem with practice, tasting more than fifty wines in the four days of the course. A final exam will then award them the qualification of European Quality Wine Hero, to symbolize their role as representatives of high-quality European wines in their home country.

Information about the NGO Maestro program is available on the official website at: canada.nativegrapeodyssey.com/sign-up-form/ .

About: Native Grape Odyssey is a project financed by the European Union and managed by Unione Italiana Vini and Interprofesional del Vino de España (OIVE) for the promotion of PDO and PGI European wines abroad, in particular in three countries: Japan, Canada and Russia. In order to achieve this, the Native Grape Odyssey educational program will organize wine seminars, workshops and b2b meetings both in these countries and in Verona, Italy, inviting wine experts and influencers from these countries. These events, realized in the span of three years (2019-21) aim at creating awareness about European native wines abroad, in particular Italian and Spanish wines, which share a long tradition and a high standard of quality.