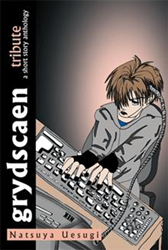 On January 7, 2016, science fiction fans celebrated the incept date of the replicant Roy Batty, a character in Ridley Scott’s influential 1982 film “Blade Runner” that envisioned a radical future where these new life forms rebel and struggle to survive while being hunted by government agents. These themes, which became cyberpunk staples, are rekindled and renewed by author, futurist and white hat hacker Natsuya Uesugi, whose book series offers a high-resolution “grydscaen” (published by Xlibris) of a gritty world where hacktivists thrive.

As William Gibson, cyberpunk pioneer and the author of “Neuromancer,” said: “The future is already here — it's just not very evenly distributed.” In that vein, Uesugi shares vision of a fractured society with vast, asymmetric inequalities, a world replete with intrusion, infiltration, government overreach, data theft and trade, psi-inducer drug smuggling and social engineering – analogies of present issues and those projected to occur in the near future.

The plot follows a young adult named Faid, who is recruited by a powerful member of SenseNet’s corporate board to organize the Packrats, hacktivists bent on stopping the government’s experimentation of individuals with psychic abilities. Faid recruits other elite cyberjockeys, including Rom, a young and homeless LGBT psychic who might be the most talented hacker in their group. Well-organized and equipped, the Packrats strike hard, but the government has immense resources and enhanced operatives that allow it to pursue and endanger the dissidents.

A fast-paced spectacle of high tech action and intrigue ensues as things come to a head in Uesugi’s intricate vision of tomorrow that explores the imbalance of power and wealth in society, government unaccountability, encroaching authoritarianism, the marginalization of minorities and the emancipatory potential of bleeding-edge technology interfaced with old-fashioned collective, organized action to build solidarity and attain social justice.

About the Author
Natsuya Uesugi is a systems analyst and software engineer who have worked in the design of aerospace, semiconductor and financial systems. With a master’s degree in international management and a minor in Japanese, Uesugi has been around computers most of his life. Also an art student, he would like to make a graphic novel of “grydscaen” someday.